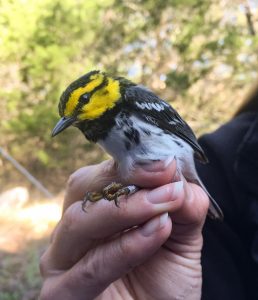 Photo of the banded golden-cheeked warbler by Kaileigh Smith

Two of the natural areas, Purgatory Creek and Spring Lake, were acquired in part using funds from Texas Parks and U.S. Fish & Wildlife for the purpose of protecting the golden- cheeked warbler, an endangered species.  Access during the spring is prohibited on the north end of Spring Lake and on Paraiso Trail in Purgatory Creek.

The golden-cheeked warbler (Setophaga chrysoparia, GCWA) is a small neotropical passerine that breeds only within the Edwards Plateau Region of Central Texas. It is dependent upon large stands of mature juniper-oak woodlands that are typically located near or along canyon slopes. The birds use this habitat for nesting, breeding, and carrying out most foraging behaviors during the months of March – July. Due to habitat loss and fragmentation over the past 50 years, the GCWA was emergency listed as endangered in 1990 by the U.S. Fish and Wildlife Service. Since then, multiple conservation-based institutions, organizations, military bases and independent biologists have dedicated their time, finances, and effort to studying and preserving this species. Even though research has been fruitful and current GCWA population numbers appear stable, the warbler continues to suffer from, first and foremost, habitat loss and fragmentation, followed by other threats such as brood parasitism and predation, anthropogenic activities and noise.

A group of nine students completed a survey of the three properties in 2017 and determined that there were two GCW in Purgatory Creek, none in Spring Lake and five on Freeman Ranch. In both years the students were trained to identify the birds by sight and sound, employ mapping techniques and follow protocols adopted in similar surveys using methods similar to those utilized by the City of Austin, Travis County Balcones Canyonlands Preserve, and Fort Hood Military Reserve.

Maybe it was the use of fourteen surveyors over nine in 2017 or the number of hours expended–800 in 2018 versus 300 in 2017–but (drumroll please) 11 males were identified this year. Three warblers were found in Purgatory Creek natural area, 7 on Freeman Ranch and one in Prospect Park, which is part of PCNA.

Rylander concluded her report with these comments: “Although the results of this study may not seem impressive from the raw data, it is still important to monitor the timing and habitat usage of the GCWA within these protected areas in southeastern Hays County. As more construction occurs along the I-35 corridor between Austin and San Antonio, the Freeman Center and City of San Marcos Parks may become increasingly important for the survival of the warbler in this portion of their range. It is apparent that this species is attracted to and utilizes the juniper-oak woodlands located within these properties, therefore it may be a matter of time before the individual warblers begin to pair-up and successfully breed on property as well.”