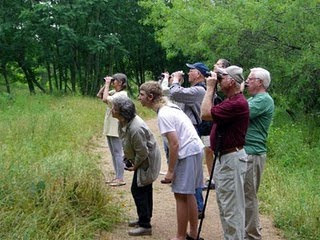 Master Naturalists and members of the San Marcos Greenbelt Alliance marked the International Bird Migration Day May 15th with a birding walk in Schulle Canyon Preserve. It had rained earlier in the morning and the clouds kept the skies overcast and humid.
Jesse Huth an expert birder from Wimberley led a half dozen interested walkers along a trail designated in the Heart of Texas birding trail through a live oak, ashe juniper, and elm preserve in the city limits. When the sky was overcast and cool, the birds remained in the tall canopy and sang nosily. Warblers were in abundance as the magnolia, yellow, common yellow throat and Wilson’s warblers were heard and then seen as they passed through the Hill Country for destinations north.  Numerous native birds were also sighted including red-eyed vireo, Bewicks and Carolina Wrens, and mockingbirds.
All the activity wasn’t confined to the skies as student Master Naturalists Gena Fleming, Judy and Richard McBride found a wealth of insects including beetles and caterpillars climbing about on the tall grasses and wildflowers.

The walk concluded just as the sun broke through and the temperatures began to rise.  — Lance Jones