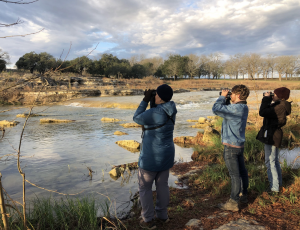 This year’s Christmas Bird Count was held on a blustery, cold December 19th. The annual event has been conducted in San Marcos for the last six years, with Rebekah Rylander organizing, participating in, and tabulating the data collected by multiple teams of birders each year.

The 53 participants fanned out in a 15–mile radius around San Marcos. Starting at sunup, some teams worked the full day. These Citizen Scientists included university students, Master Naturalists, and local residents who simply enjoy getting outdoors with a purpose. The six natural areas, Freeman Ranch, downtown, private properties (with permission of the landowners), and public roadsides were the scope of the count.

At the end of the day the birders gathered at Chuy’s for a wrap-up dinner to report their sightings, both numbers and unusual birds. For a very cold day the numbers were similar to those of past years. The teams saw 121 different species. Unusual sightings were common goldeneye, bald eagle, zone-tailed hawk, eastern towhee, and American woodcock. Colton Robbins, who led Team Seven, said of the group’s sighting of a bald eagle, “The degree of white in the tail and head feathers puts this bird at around 3 years old, still 1.5 years away from full mature plumage.”

Following the Christmas Count, the collated data is forward to Audubon to merge with that from other groups to create a snapshot of bird populations around the Americas. As the National Audubon Society states on its website, “From December 14 through January 5 each year tens of thousands of volunteers throughout the Americas brave snow, wind, or rain, and take part in the effort. Audubon and other organizations use data collected in this long-running wildlife census to assess the health of bird populations, and to help guide conservation action. The long term perspective is vital for conservationists. It informs strategies to protect birds and their habitat, and helps identify environmental issues with implications for people as well.” 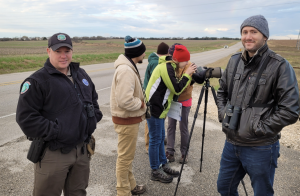 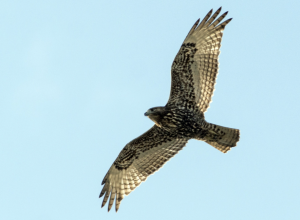 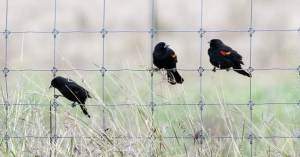 Written by Lance Jones, former SMGA board member and member of the Outreach Committee, and photographed by Colton Robbins and the author.