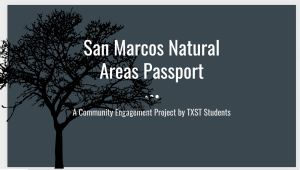 For its project in collaboration with SMGA this semester, Professor Colleen Myles’ Interpretive Geography class created a Natural Areas Passport, the goal of which is to engage children and adults in the Greenbelt more. Inspiration for the undertaking came partly from the National Parks Passport program, in which users collect stickers for each park they visit. To make their version more accessible, Myles’ students developed both a physical and a virtual passport, with the latter designed to appeal more to adults.

Dr. Colleen Myles, welcoming visitors to her students’ presentation of their work.

To accomplish this assignment, the students broke into four groups, each with its own tasks: content, design, outreach/accessibility, and surveys.

The content group was charged with collecting photos and information on the six established natural areas. They focused particularly on points of interest that could be pinned on the City’s interactive trail maps in the future. In Lower Purgatory, for example, they noted the flood control dam and the interpretative sign erected by SMGA. In Schulle Canyon, they included the new bird viewing station and Tales on the Trails, neither of which is currently marked as a “point of interest” on the map. 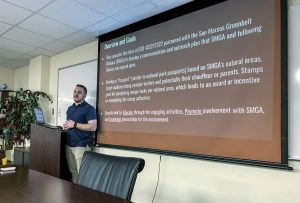 Using the material produced by the content group, the students responsible for design focused on five areas: an ArcGIS digital walk-through, QR codes for users, a demographic survey, an interactive quiz, and suggestions for implementation of the project. The walk-through, available here, is intended to “inform park-goers about six of San Marcos’s natural areas and aid in them finding accessible travel routes to these locations.” The online passport also includes maps, photos, and descriptions of points of interest in each natural area. At the end of the walk-through, visitors can use QR codes to access the interactive quiz and the survey (produced by the survey group). Another QR code, available at the top of the walk-through, leads to information on bus routes adjacent to each of the natural areas (produced by the outreach/accessibility group). 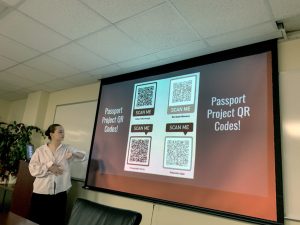 A second goal of the design team was to create a physical passport, specifically for use by children. This would also include information about the natural areas, highlighting points of interest, but it would do so through a mix of activities—crossword puzzles, pictures to color, anagrams, true or false questions, and matching games. Once printed, this passport could be distributed to students in a variety of settings. Ultimately, a student who completes the passport would receive a reward from a local business—for example, a free drink or a slice of pizza.

Given that they had just a short time to create their project, Myles’ students weren’t able to implement it this semester. Much remains to be done, such as finding a way to distribute the physical passports, deciding how long students will have to complete them, and finding local businesses willing to donate prizes. Another facet of the project that remains incomplete is adding more points of interest to existing trail maps created by the city.

The task is a large one, but fortunately, two of Myles’ students—Lauren Thompson and Courtney Stuhldreher—have agreed to serve as interns during the upcoming spring semester. Picking up where the class left off, they hope to complete the rollout of the physical passport and the addition of GIS information to the trail maps.

Photos and text by Susan Hanson, board member and editor of The Loop.