San Marcos is a well-positioned small city.  Bigger, older cities are figuring out the hard way what they did wrong when they were smaller and growing. We get to watch and learn without the expense of fixing the mistakes or losing what sometimes cannot be recovered.
I heard Ann Thompson’s three minute feature on Nation Public Radio on January 21st . She describes a process underway in large cities of “daylighting” long hidden streams. It has been happening in Cincinnati, Seattle and many other large cities. Streams that had been buried in underground vaults are now being opened up and allowed to breathe, grow vegetation and become vital elements in the urban landscape.  The people in the area are discovering that there is a wide spectrum of benefits to letting streams be streams. The neighbors and the city in general enjoy positive economic, environmental, recreational, social impacts to name a few.

Big cities in Texas are no exception as many streams and rivers have been channelized or encased in concrete or otherwise abused in Dallas, Houston, and even Austin. If San Antonio, a city who had some savvy visionaries a few decades ago, had known a century earlier that their river could be a key focal point for their economy perhaps they would not have built to its edge, perhaps they would have ensured the quality of its water. San Antonio has really come a long way in the last 10 years and is now aggressively preserving the downstream and upstream portions of the San Antonio River and its creeks where they can still be secured. Unfortunately they cannot undo some the permanent obstructions to their greenways. Some overpasses, culverts and wide highways grew up before they realized the value of those ‘ditches’, otherwise their system might truly be world class. In nearly every case they could have provided structures that would go over the creeks leaving plenty of room for people and nature to connect continuously through their city.
San Marcos does not have to learn the hard way, we can learn from their mistakes.  The Greenway plan that SMGA proposed during the master planning process of 2011-12 recognizes what big cities are just now realizing, that our creeks and rivers are valuable assets with tremendous potential to add value to many parts of our city’s life and livelihood. Now is the time to reserve those places and let them grow and mature as our city grows and matures. But we are just beginning to put in place what is needed to ensure these greenways are protected and saved for the future.

The City of San Marcos has already taken measures to ensure connectivity and vegetation along Willow Creek as it seeks to reduce flooding in the Victory Garden neighborhood. The new Guadalupe Street Bridge and the bridge to be built over Purgatory at Hunter will accommodate biped facilities.

As we begin to write the land development codes and grow our infrastructure we will need to be vigilant and insistent. The hard learned lessons of those bigger older cities will only be of benefit to us if we don’t make the same mistakes. 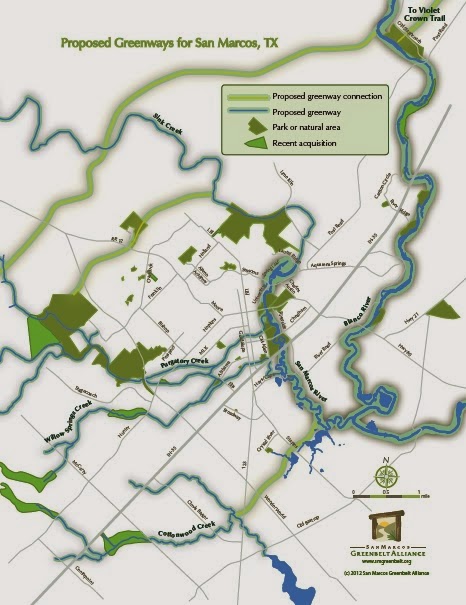