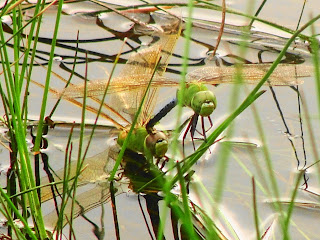 The dragonfly photo to the right was taken Sunday, September 26, late morning, at Prospect Park. I was rushing through, having decided on a whim to make a quick visit. As soon as I stepped onto the stone that borders the pond, I saw a dragonfly hovering with its tail down toward the water. I assumed it was a female laying eggs and took a picture. It wasn’t until I checked the display screen on my camera that I saw the second dragonfly. Then I understood that the first dragonfly I had seen must be the male “contact guard,” keeping an eye on the female while she laid her eggs.

I had only learned about this practice recently, but had yet to observe it, at least not in the egg-laying process. Male dragonflies remove from the female any sperm previously deposited by another male. While some females lay their eggs alone, others are guarded by the male to ensure another male doesn’t intervene and switch out his sperm. Some may simply hover nearby, while others actually attach themselves to the female, as seen in the photo above. More about dragonfly reproduction

I don’t know which species the dragonflies are; maybe someone else can tell me. I love the way their golden wings are reflected in the water. In the photo, a little golden rainbow can be seen arcing over the water toward the egg site, as if to bless or vitalize this new birth.

It was hard for me to believe such a quick visit could be so mesmerizing. I felt a deep sense of blessing to be living in a place where devoted guardians maintain sanctuaries of nature, enchantment is still possible, and everyday magic can be perceived by anyone who takes a little time to look.