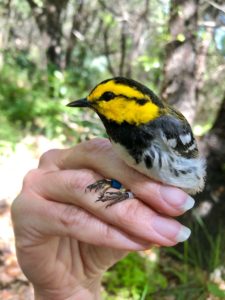 Every year for the last three years Rebekah Rylander has led a team of Texas State students searching for endangered Golden-cheeked Warblers. The group begins in February laying transacts for Freeman Ranch (5,000 acres), Purgatory Creek Natural Area (more than 700 acres), and Spring Lake Natural Area (254 acres).  The warbler is a small neotropical passerine that selectively breeds only with the Edwards Plateau Region of Central Texas.

The nesting is dependent on large stands of mature juniper-oak woodlands that are typically located near or along canyon slopes. The birds use this habitat for nesting, breeding, and carrying out most foraging behaviors during the months of March-July (Pulich 1976). Due to habitat loss and fragmentation over the past 50 years, the GCWA was emergency listed as endangered in 1990 by the U.S. Fish and Wildlife Service (USFWS 1990). Since then, multiple conservation-based institutions, organizations, military bases and independent biologists have dedicated their time, finances, and effort into studying and preserving this species. Even though research efforts have been fruitful and current GCWA population numbers appear stable, the warbler continues to suffer from, first and foremost, habitat loss and fragmentation, followed by other factors such as brood parasitism and predation, anthropogenic activities and noise, among other things.

This season, due to COVID-19 restrictions, the surveys of the transacts were conducted from mid-March to early April before the project was shut down. Due to limitations, only ~ 200 hours of volunteer survey efforts were expended in 2020. Even with a shortened season, a total of seven unique GCWA males – 6 at Freeman and 1 at Upper Purgatory—were detected. The Texas State group did not get to survey Uber Purgatory early in the season, and a brief hike through the property in mid-May resulted in no positive detections. Spring Lake Preserve was surveyed on April 6, which also resulted in no positive detections.

While the coronavirus restricted activities, it did show the need for large natural areas to enable humans to engage in social distancing and be in nature for shinrin-yoku (Japanese for forest bathing. Shinrin in Japanese means “forest,” and yoku means “bath.” So shinrin-yoku means bathing in the forest atmosphere, or taking in the forest through the senses.) Both Purgatory Creek and Spring Lake Natural Areas were established in part with funding from the Texas Parks & Wildlife and U.S. Fish & Wildlife Service.

Written by Rebekah Rylander, a Ph.D. student in biology at Texas State University, and Lance Jones, a Hays County Master Naturalist as well as a long-time SMGA volunteer and former board member. Rebekah’s report concludes her work as a 2019 recipient of an SMGA research fellowship.