Especially in Schulle Canyon, where ten non-native and berry-loaded trees either came crashing down or pulled out of the ground.  The three days of wind and rain August 26-28 were hard on all the trees in the natural areas. Hackberry, live oak and American elm trees lost branches if not the whole tree to the sustained high winds and 9-11 inches of rain during that period. 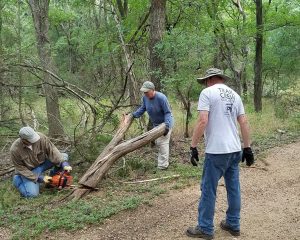 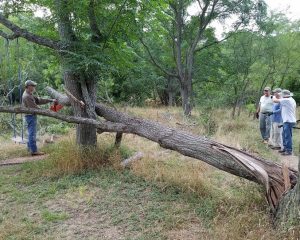 The trail crew accumulated more than 132 hours of work that included assessing the damage, chain sawing and lopping, and generally cleaning-up after the storm. Schulle was hard-hit with a number of the tall trees crashing down, sometimes taking nearby trees.  The crew doesn’t ordinarily use chain saws but the damage required it. Safety concerns, both our own and that of trail users, was paramount in removing the downed trees.

Many of the understory trails held up well, as the rain was spread over several days. Forecasters are predicting more big rain events in the near future.