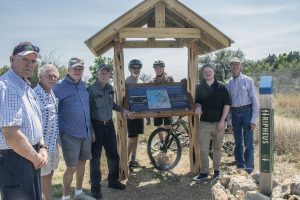 On Friday, April 1, members of the Upper San Marcos Watershed District (USMWD) board met with several SMGA board members to celebrate the installation of an interpretive sign created by Texas State student Ian Long. Located at Flood Control Dam #5 in Lower Purgatory Natural Area, the sign was created with financial support from USMWD and SMGA. While Rich Earl, Greg Moore, Todd Derkacz, and Susan Hanson assisted Long with the text and design of the sign, Scott Henize, Ben Peck, and others from SMGA created and installed the kiosk.

As the sign explains, Hays County’s five flood control dams were built in response to a devastating flood on May 14-15, 1970, that resulted in two deaths and $7 million in losses—an amount that today would translate into more than $51 million.

Over the course of those two days, as much as 18 inches of rain fell in the San Marcos area, flooding the Blanco River, Sink Spring Creek, and Purgatory Creek, and causing the San Marcos River to inundate more than 400 homes, as well as an even larger number of businesses and public buildings. According to a 2016 report by the Natural Resources Conservation Service-Texas, “The 1970 flood spurred action. Through the cooperative efforts of state and federal governments, city and county officials, the Upper San Marcos Watershed Reclamation and Flood Control District, also known as the Upper San Marcos Watershed District, was formed.”

The process was long, but between 1981-1991, the five flood control dams were built with federal funds obtained on Hays County’s behalf by the late Congressman J. J. (Jake) Pickle.

Rick Mireles, a field engineer with the NRCS, observed, “These five floodwater retarding structures provide $3.7 million in annual benefits [in 2016 dollars] including reduction in flood damages to agricultural lands, and rural and urban infrastructure including roads and bridges.” He further notes that the floods of 1998, 2002, and 2015 would have been even more devastating without the five dams, which impounded an estimated 20,352 acre-feet or more than 6.6 billion gallons of water.

“After rainfall ends, flows into these creeks and dams can continue for up to 10 or more days so the slow release of the captured storm runoff greatly reduces downstream flooding,” USMWD administrator Bill Taylor notes in the 2016 report.  “The dams also allow the water to recharge to the Edwards Aquifer. It is estimated the amount of water reclamation in a normal rainfall year approximately 1.5 billion gallons, which is a large portion of what is used by the city of San Marcos in a year.”

To see this sign, take Dante from the Hunter Road trailhead, and then turn onto Nimrod, which will take you to the top of the dam. https://smgreenbelt.org/wpcontent/uploads/2020/09/Purgatory-8.5×11-update-9.9.2020.pdf

Written by Susan Hanson, SMGA Outreach Chair and editor of The Loop.