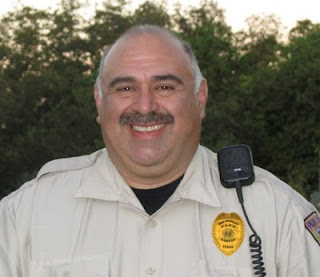 If “park ranger” makes you think of that cranky cartoon character who chased Yogi Bear and Boo-Boo around Jellystone Park, and you think you’d have to visit a state or national park to see a real one—welcome to my world. That’s pretty much how uninformed I was until I got wised up a few weeks ago, thanks to a delightful conversation with Larry Soza, the newest park ranger right here in our own little ol’ city of San Marcos.

This past June, Larry joined the local force of about fifteen park rangers (fifteen—who knew?) as the one and only full-time member. Launched into his new job amidst the turbulent rush of summer river traffic, he quickly came to rely upon the knowledge and experience of his part-time colleagues, many of whom are San Marcos natives or long-time residents, and several of whom split their time among other such public-service careers as firefighters, paramedics, and sheriff’s deputies.

He’s still learning his way around town and all the various park spaces, but Larry brings to his new position more than 25 years of experience in law enforcement, first in Corpus Christi where he earned his commission as a police officer, followed by nine years as an officer in his nearby hometown of Robstown. After meeting his wife, he moved a little further west to join her in Alice, Texas, and spent eleven more years on the police force there. Meanwhile, the Sozas made many trips to Central Texas to visit their daughter as she attended UT and then married and settled in New Braunfels. They grew fond of this area and felt it offered better opportunities for themselves and their son, so when the chance for early retirement arose, Larry took it and they headed this direction. Nowadays, you might very well glimpse him tooling down Hunter Road on his Suzuki Intruder, soaking up the countryside between here and New Braunfels. “I like it here,” he says. “I love it!”

As vital to his park-ranger role as his street cred as a cop is Larry’s passion for the outdoors and the natural world. Being outside was a fundamental part of his life growing up. He clearly cherishes memories of helping his father work the family’s ranching property near Robstown, and he still owns land there that he visits regularly. This love of the land is a legacy he has always shared with others, particularly his son. He says the two of them often trek off to their hunting blind and find themselves more than content simply to sit, observe, and enjoy. Larry’s wife is also a happy camper—literally. Camping has always been a favorite activity for the couple, and his wife is very aware that Larry is never happier than when he’s outdoors. When he showed her the job listing for San Marcos park ranger, she told him, “That’s you.”

An old axiom about park rangers is that they protect the people from the park and the park from the people. Larry seems to have the skills and the perspective to handle either side of that equation, as well as its corollary of protecting the people from the people. When tourists and river visitors swarm San Marcos in the summer, who or what gets protected may be a tossup, although first aid, safety, and rescue missions no doubt take priority over resource preservation. But now that the seasons have changed and crowds subsided, Larry is eager to spend more time exploring San Marcos’s parks and greenspaces, seeing to the improvements and preparations that will facilitate protecting them just as well as the people who visit them.

If you chance to meet Park Ranger Larry Soza, you’ll probably be happy to find he’s a most congenial fellow—and wears an unforgettable smile that rightfully belongs in a Crest commercial. Just remember, don’t be hoisting any pick-a-nick baskets (or practicing archery in a greenspace, or carrying glass containers at the river, or littering at your next family barbecue). You don’t want him smiling at you all the way to jail—right, Boo-Boo?