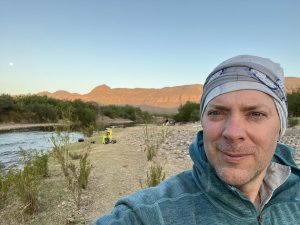 Ben, his wife Cori, and son Zach have lived in San Marcos since 2007. A karst hydrogeologist by training, Ben works to understand groundwater in karst aquifers, and works extensively with organisms that live in the springs and aquifers of Central Texas.

A graduate of Radford University and Virginia Tech, Ben researches and teaches in the Department of Biology at Texas State University, where he is also the director of the Edwards Aquifer Research and Data Center. Much of the work he has been doing recently involves describing new species that are being discovered in the Edwards Aquifer. He’s quickly learned that this will be a lifetime of work!

As “hobbies,” Ben has gotten himself sucked into learning as much as he can about Terrestrial Molluscs (land snails – thanks to @benhutchins), Dragonflies and Damselflies (Odonates), and now Ferns in Texas. He spends a fair amount of time sorting through litter samples for micro-snails in Texas, and one day soon he will be loading hundreds more observations to iNaturalist (@beschwar).

Natural areas are places of mental refuge for me, no matter where they are. When I need to decompress mentally, I want to be outside in nature. As someone who spends a lot of time studying, observing, and thinking about both water and biology, natural spaces are also a place where I can observe all these things and learn more about them. I also truly appreciate the intrinsic value of natural spaces, even if I never visit them. Here in Texas, we have relatively little, relatively crowded, and more restricted access to public lands, but the natural spaces in San Marcos are important reminders that I shouldn’t take access to natural spaces for granted and should appreciate them no matter where they are.

Who or what most influenced your view of the natural world?

I grew up on a farm in the mountains along the border between western Virginia and West Virginia and began exploring, discovering, and mapping local caves as a young teen. Most of the people I caved with were much older than me, many had academic backgrounds (though I didn’t know it at the time), and several of these people strongly influenced my views of the natural world. They pointed out processes and connections between things that I had previously been oblivious to, including important connections between the surface and subsurface environments in karst regions (water, in particular), and the fact that delicate ecosystems exist in both surface and cave environments. The things I learned from those mentors and friends while we were exploring caves have stuck with me for years and helped motivate and direct my curiosity about how the natural world works. Eventually, their influence (through a long and indirect path) led me to go to college, and one of them served as a member of my Ph.D. committee.

What is your favorite trail? What do you like about it?

I assume this is asking about my favorite San Marcos Greenbelt trail, but maybe not. So I’ll give a two-part answer. My favorite San Marcos trail is Dante in the Purgatory Creek greenspace, and some of the short side trails that connect to it. I especially enjoy the middle section that follows the path of Purgatory Creek itself. I like the side trails because they are more remote and relatively less traveled, and it is easier to spend time sitting and enjoying nature there. I think these trails are the quietest places inside of San Marcos in terms of escaping from traffic noise that is heard in most places around the city.

My favorite trail other than this is probably a tie. One would be the trails in the White River Valley of the Bob Marshall Wilderness. It is the most remote place I’ve ever been, which is why I love it. The other is a series of trails we hiked in and around Škocjanske Jame (Skocjan Caves) in Slovenia. This trail system passes through spectacular caves and giant vertical sinkholes, passing into and out of the cave and surface environments multiple times. It just has a magical feel to it and is unlike any other trail I’ve been on.

I most enjoy hiking and being outside in nature on Greenbelt trails. As I hike, I love to look for critters like all the different terrestrial snail species that live in the local canyons, especially the tiny ones that are just 1-2 mm long. Winter and spring seasons are my favorite times because it is cooler (tolerable), and more plants and cacti are emerging and blooming. I also really enjoy mountain biking on the trails, though it has been several years since I’ve done it with any regularity.

What recommendations would you give new users of the trail?

Have fun! I suggest taking time to explore the trails and find places to just sit and listen and notice what is around you. Pay attention to small things and you may be surprised at how much life and action you will see. Be prepared and take plenty of water and a map and remember which trailhead you entered; I often give directions to confused and thirsty hikers who are trying to find their way back to the trailhead. Finally, take care of the trails and pick up trash you find.