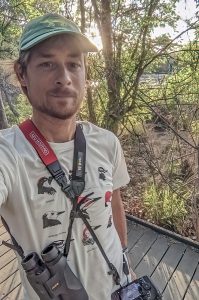 Kenny is originally from San Antonio and moved to San Marcos in 2002 to attend Southwest Texas State University. He earned his Bachelor of Science in GIS in 2007 and Master of Applied Geography in Resource and Environmental Studies in 2010. Go Bobcats!

He has worked in Hays County for the cities of San Marcos and Buda as a GIS Analyst and GIS Coordinator, and as a GIS Team Lead in the Oregon Department of Transportation. He currently works as the Trails and Transportation Planner covering Hays and Travis Counties for Great Springs Project. He spends most of his free time running, birding, and logging plant and animal observations in iNaturalist.

I value the natural areas in San Marcos and in general because they provide so much quality of life to the people who use them and to the flora and fauna that depend on them as development in Central Texas increases. It is no secret that this region is one of the fastest growing in the country, so preservation and responsible management of natural spaces have never been more important. In a state where less than 4% of the land is publicly accessible, providing more access to natural areas is a necessity. Natural areas help protect our water, provide access to the outdoors for the folks who live near them and allow us to experience the things that make the Hill Country such a great place to enjoy the outdoors.

Who or what influenced your view of the natural world?

Early in my life, my grandmother used to take me to the park near our house in San Antonio and point out the various animals, like white-tailed deer. We would spend hours looking at maps, and I probably had a million questions she didn’t know the answer to. But she was the first one who made me think about nature and our interaction with it as humans.

The way I view and interact with natural spaces now is really due to my early interactions with some SMGA “lifers” – specifically Todd Derkacz and Lance Jones. Their passion, knowledge, and commitment to this work as volunteers are contagious and opened my eyes to the importance of what SMGA does. If you’ve chatted with either of them for a few minutes, you likely know what I’m talking about. But it isn’t just limited to those two. Through the years, I’ve had many amazing interactions with SMGA volunteers, so if you’re reading this, there’s a chance I also have you to thank for opening my eyes to the importance of these spaces and this work.

What attracted you to the Greenbelt Alliance?

My first interaction with SMGA was probably sometime around 2007 or 2008. I was just starting grad school at Texas State and joined one of the Bobcat Build work crews—I think cleaning up Ringtail Ridge before it opened to the public. I had always enjoyed trail running and mountain biking, but that workday was one of the first opportunities I had to be a part of the amazing work that SMGA does. I still remember Todd’s speech before the crew went out to begin that workday. He really has a way of capturing the attention of everyone around him, as anyone who has heard him speak can surely attest to! Throughout the years, I’ve gotten to know many amazing people who volunteer for SMGA, and I truly couldn’t be more grateful to know them. That initial workday back at Ringtail Ridge really did help shape my professional career in GIS and urban planning, and my personal life as a trail runner, birder, and all-around trail lover. Since then, I have been involved in various mapping projects with SMGA, including some of the first standardized maps of the Natural Areas back around 2010, the occasional trail workday, and other projects here and there, like the Purgatory Creek map bandanas in 2013 and the new Spring Lake bandana which just came out this month. I got to help build the birding station in Schulle Canyon earlier this year with some other SMGA folks, and I feel very proud to have been a part of it.

What is your favorite trail? What do you like about it?

My favorite trail is a three-way tie between Warbler Way in Schulle Canyon Natural Area, Centipede in Spring Lake Natural Area, and Tonkawa/Wickiups in Spring Lake Natural Area. Warbler Way is a favorite birding trail of mine, especially with the new birding station and the diversity of birds that can be found in Schulle Canyon throughout the year. Centipede provides a great, flowy trail for trail running, along with some really neat seasonal stream crossings, and is my favorite part of running the Spring Lake loop. Tonkawa is another fantastic trail, smooth and wide with a gently sloping uphill. It is a great easy hike to bring a few friends along on, and you get to see an amazing view from the lookout at the top of Wickiups. 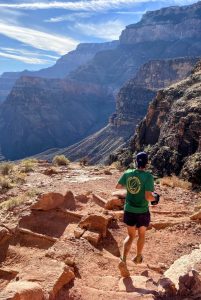 Birding and trail running. There’s also nothing like just going for a nice walk, especially on a beautiful spring day when the leaves are back on the trees, and flowers, bugs and birds are all showing up to enjoy the end of winter.

What recommendations would you give new users of the trail?

Go to a trailhead and explore. Everyone enjoys trails and natural spaces for their own reasons. Maybe you will find you love to hike, or to identify plants along the trail. Maybe you’ll discover that a calm walk listening to birds is just what you need to clear your mind. Maybe you’ll see someone enjoying the trails on a mountain bike and think “That looks awesome—I need to try that!” Find your reason and then go enjoy the trails, because here in San Marcos, we’re lucky enough to have some of the best trails in the state of Texas!