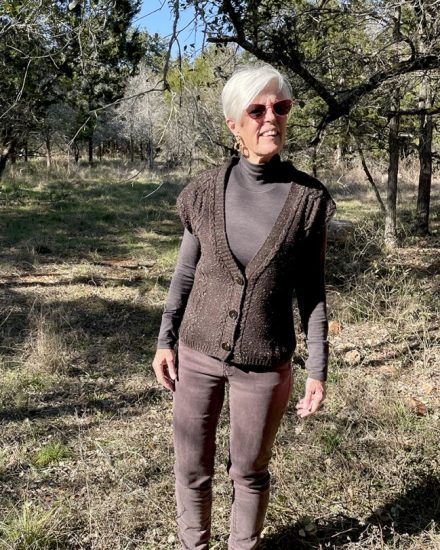 Melissa Katz was born and raised in Southern California. She received a BS in physiology from UC Davis and graduated from Pacific University College of Optometry. In optometry school she met Kevin Katz, who is also an optometrist. After moving to Houston, Kevin purchased a practice in Galveston, and Melissa opened hers in Clear Lake in 1981. In 1983 they had their first son, Seth, followed two years later by his brother, Chase.

The natural areas were part of my ticket to getting to know people in San Marcos after having retired and moved here in 2016 from the Houston area. I was drawn to the Greenbelt as a group because it was active and outdoors, and come to find out, a great group of interesting and accomplished individuals.

Who most encouraged your connection with nature?

One of the first people I met in San Marcos was Dick McBride at the Discovery Center, where we volunteered in the garden. It was Dick who first told me about the Greenbelt Alliance and the work it does in the natural areas. As it turned out, this was a community that interested me. Eventually Dick encouraged me to become a Master Naturalist, which I did in 2021.

What is your favorite trail?

Some of my favorite trails are Centipede, Grey Fox, Ripheus, and the new Dante extension. These are trails that I have helped build, which I found very satisfying. However, the trail I like the most is Malacoda, as it is in a secluded, quiet little valley.

Trail building with the crews—being out in nature and getting to know everyone—is what I most enjoy. I especially enjoy the work Team Flora does in planting and harvesting seed for the natural areas.

What advice would you give new trail users?

What I would most like to share with new trail users is that using the Greenbelt is a privilege and opportunity to get out in nature. These places should be valued and cared for by the community. Every user should respect the natural areas and leave them as they found them. It is not their right to leave dog poop, graffiti, and rogue trails, or to have their dog off leash.