One story claims that if you kept traveling up the creek from the San Marcos River you would eventually find a small hamlet named Purgatory roughly where the creek meets Purgatory Road. It is supposed that the inhabitants used the name to keep people away, but stories have a way of taking on the sentiments of the re-tellers. One might imagine that life was once a hard scrabble existence with floods, fire and drought, and the name Purgatory was a way to declare that it wasn’t quite as bad as hell, but almost. But the creek took the name Purgatory. 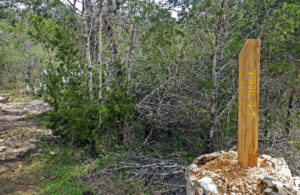 An Italian named Dante Alighieri put the ideas and imagery of hell, purgatory and paradise in a narrative poem titled The Divine Comedy. It was a kind of satirical obstacle course/travelogue with a cast of characters found in fourteenth century Italian religious, culture and political life, as well as in the mythic tales from faraway lands, once upon a time. Dante is guided from the inferno to paradise by Virgil. They encounter a cast of characters and many hurdles between the Inferno and Paradise, all of which happen to be a great source of trail names.

Ripheus was a loyal Trojan who was just and equitable and was given a place in Heaven in The Divine Comedy. Malacoda, which translate to “bad-tail,” is a name Dante made up to describe a demon guarding one of the ditches our heroes have to cross on their journey. Ovid was a Roman poet whose works provide many of the mythical characters appearing in the narrative. Dante and Virgil encounter Ovid in Limbo, the first Circle of which is a kind of outer room to the inferno where the good people who lived before divine redemption was possible could exist, never knowing they could not get to Heaven.

SMGA is vigilant about making the Purgatory Creek Natural Area grow as our city grows. The process has been long, 22 years so far, and has involved many hurdles with a wide cast of characters. Our story is a comedy, meaning that it has a happy ending. Will we make it all the way up to the small hamlet of Purgatory, or perhaps beyond? Well, who can say where the journey will take us, but there will certainly be many new places, new characters and new trails ahead.