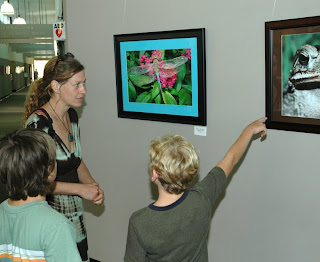 The annual event continues to grow in attendance and quality as members of SMGA and Hill Country Photography Club join forces to spotlight the natural areas of Hays county through photographs. This year’s contest was judged by Adolfo Isassi, who has exhibited his work at fine art galleries around Central Texas. Sixty-five photographs from the event will remain on exhibit at the San Marcos Activity Center until November 5th. SMGA’s silent auction returned for a second year and helped with funding of projects, including trail building, monitoring local natural areas, and the Loop & Check / greenbelt master planning process.

It takes many volunteers and contributors to make such a cool event happen. The Crystal Creek Boys (Matt Lochman, Nick Lochman, Ian Lee, Austin Reeves and our own Mary VanZandt) performed a soothing blend of old-time and contemporary folk music before the winners were announced. Linda Kelsy-Jones served as both curator and caterer with help from Leah Molina, Kathy Rogers, and SMGA board members. The food was sooo good! Chloe Yingst and Johnny Villarreal assisted Linda with exhibition set up and San Marcos Parks and Recreation helped with award certificates and photo collection. Thanks also go to Dianne Wassenich for help with food and auction set up and to Lance Jones, event photographer. Sharon O’Neil assisted with auction set up and checkout.

Please take some time to look at our list of silent auction donors and give them some business or a hearty thanks when you can. Thanks to Mike Derkacz who has been a sponsor for two years in a row.

The awards were presented by Todd Derkacz of SMGA and Art Arizpe of the HCPC. In remarks before the awards Todd suggested we consider, “every photograph an invitation from nature carried on the stationary of a gifted and passionate photographer. It reads: Look at me, visit me…”

The awards were as follows:

What is It?, Lois Schubert, Aquarena Springs