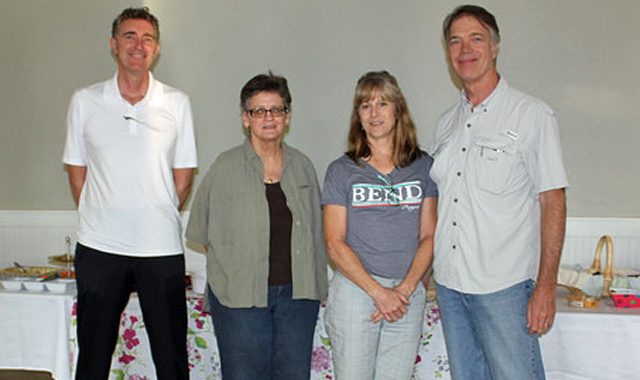 06
Mar
SMGA Annual Meeting 2017
Introducing Newly Elected/Appointed Directors
Anna Huff was elected to a second 3-year term. As Communications Specialist for The Meadows Center for Water and the Environment, Anna is both passionate in her public relations practice and committed to inspiring the next generation of environmental stewards. Anna began her career at The Meadows Center in 2012 as a communications assistant, helping to increase the Center’s social media presence, and helping develop communications operations. She received a Bachelor’s of Science in Public Relations from Texas State in 2015. As a member of our Outreach Committee, Anna helps raise awareness about the work SMGA does to support greenways and trails in the San Marcos community.
Elected to 3-year terms are Diane Phalen and Scott Henize. Diane and Scott are married. Diane has been running and riding on the trails in San Marcos since they were mostly deer trails. She also enjoys camping in Big Bend, riding her horses and fly fishing with Scott. When she’s not playing or working outside, she’s working as a podiatrist and has had a practice in San Marcos for 30 years. Diane works on the trail crew when her schedule permits.
Scott Henize was raised camping and enjoying the outdoors as soon as he could walk. He had the great fortune of having parents who loved nature and raised all their children to be good stewards. He moved to Texas in the late 1980’s after serving in the Peace Corps and has been here ever since practicing psychotherapy. When he is not helping out with the SMGA trail crew, Scott enjoys hiking, biking, kayaking, fly fishing and spending time with his animals.
Toby Hooper was elected to a 1-year term to fill a vacancy created by the resignation of Bill Adams. Toby is a native Texan and has lived with his family in San Marcos for 16 years and loves the outdoors. He currently enjoys being a scout again by supporting his son’s troop as a leader and hopes to develop the connection of SMGA’s mission to the greater scouting community. He has worked in public health for thirteen years and sees a trail system as an essential part of a healthy community. Toby has also served on many local boards and commissions and looks forward to helping SMGA further its goals.
Susan Hanson was elected to a 3-year term in one of the newly created director positions. A resident of San Marcos since 1971, Susan is a longtime member of the English faculty at Texas State, where she teaches a variety of writing courses, including environmental writing and an honors course in nature writing. She also worked for almost 20 years as a newspaper journalist, and for 13 as the lay Episcopal chaplain at Texas State. Susan is the author of Icons of Loss and Grace: Moments from the Natural World, a collection of personal essays, and co-editor of What Wildness Is This: Women Write about the Southwest. She enjoys native plant gardening, canoeing, hiking, bird watching, and doing underwater photography while snorkeling in the San Marcos River. Susan is married, with a grown daughter and six-month-old granddaughter.
Serving a 1-year term in the other newly created director position is Stephanie Langenkamp. Stephanie has been ably taking minutes of our monthly board meetings for two years.  She recently retired from the City of San Marcos where she served as director of the San Marcos Public Library for 32 years. She and her husband, Phillip, are avid river swimmers and spend most of their vacation time camping, hiking, and messing around beaches and rivers.  They have lived in the San Marcos area since 1977.