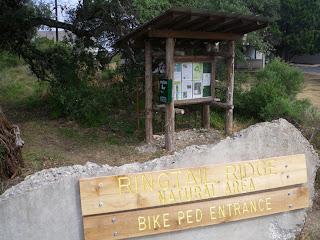 It’s a secret no more, especially if you live at the Edge or Dakota Ranch apartments: there’s another entrance to the Ringtail Ridge Natural Area on Old Ranch Road 12. It’s true, you can only access the back 40 at this entrance by foot or bike, but new signage clearly marks the way for vehicles in between Community Baptist Church and Dakota Ranch apartments. 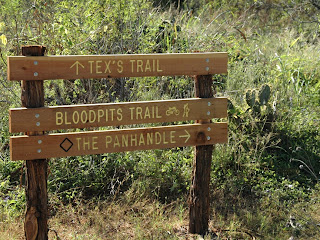 The SMGA trail crew has spent a good part of the summer controlling the invasive plants that thrived in the heavy rains and often obscured the single track treadway. Some of the trails have been named, all with historical significance, and new signage was installed courtesy of Colin Castro and Todd Derkacz. A new trail map is due out shortly from Kenny Skrobanek and the City of San Marcos.

If you’ve made a video of you or your friends attacking the berms via mountain bike, we’d love to see it. Also tell us if you found the improvements worthy and if something else needs to be done.