Tom Wassenich recently toured Wonderworld Drive with the city manager, assistant city manager, and engineers. Progress is certainly coming along. During the tour, a KBR engineer stated that he had already started working on the design of the Hunter Road / Hopkins Street improvements from Wonderworld Drive to Bishop Street and that the crossing at Purgatory Creek would only require a culvert height of 4 feet. This would be a real snag in the Purgatory Creek Trail plans we advocate, which call for a culvert / tunnel to allow free flow of bicycle and pedestrian traffic under Hopkins/Hunter. Todd Derkacz requested reconsideration by the assistant city manager, who in turn asked the engineer Mike Sexton to reevaluate. Mr. Sexton responded saying that they are only in very preliminary work on the project with environmental and archaeological surveys being conducted and suggested there is still time to include such a feature.

Meanwhile Tom, a former Transportation Advisory Board member, contacted our old friend of trails Gregg Griffin with CAMPO, who wrote this with regards the Purgatory trail:

If it’s solid, TxDOT should follow AASHTO design guidelines, or provide a reason not to. If the trail plan is conceptual, and/or not funded, TxDOT may rightfully not accommodate the potential use. Purgatory Creek trail is not in the CAMPO Mobility 2030 Regional 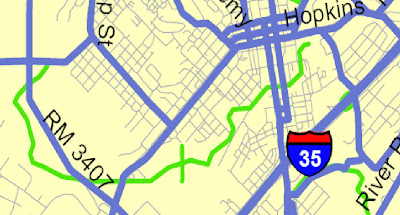 This matter has developed in the last few days, so more information will be forthcoming. But our voices may be needed to get the trail, at the very least, installed as a solid plan. Stay tuned.