As we go into the summer months here in San Marcos, more and more of us are heading outside to relax, seeking the shady spots and cool waters that can be found along the trails and in the parks here in our beautiful city.

As we do so, it’s good to be mindful that our wild cousins are out there too, trying to get their relief from the same things we do—cool water and shade. From luna moths to mosquitos, red wasps to bumble bees, bull nettle to Texas mountain laurel, ringtail to rattlesnake, Texas boasts a beautiful and varied array of species. And as a fellow Texan once told me, many of those cousins can “put a world of hurt on you.” Armed with the right knowledge, however, you will have the tools you need to keep yourself and others safe this summer. 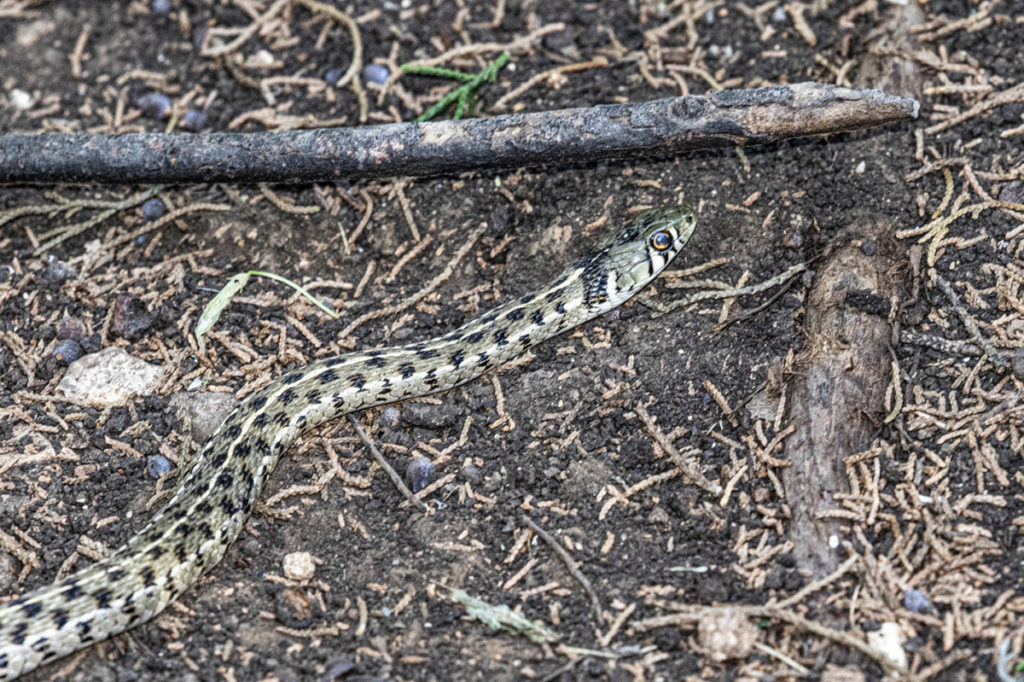 Snakes are arguably some of the most misunderstood, most often misidentified of our wild cousins. Many would agree snakes are some of the most likely creatures to cause a general ruckus and possibly lose their lives due to surprise encounters with humans. We also know summer is the time folks around here are most likely to run into snakes out on the trail or at the river.

We live in this richly unique ecosystem with sinkholes, fissures, hidden caves and other karst features where snakes and other creatures seek shade and moisture. Even on the urban trails in San Marcos, if you spend enough time out there, you will almost surely see a snake. The first two questions to ask when learning about snake safety in Hays County, Texas is “who are our local venomous snakes, and how do I identify them?”

Anyone with a mouth can bite, and if you don’t take care of a bite wound, you might get a nasty infection. But a bite from someone with a mouth, and the ability to inject venom, can be deadly. Focus on identifying the venomous species of snakes who live in our area first. In Hays County, we have four.

Of those four, three are vipers and have very similarly shaped bodies, heads and other features due to their close relation to one another. These are the rattlesnake (mostly western diamondback, or Crotalus atrox), the water moccasin (also known as the “cottonmouth” due to the white color of the inside of their mouths, or Agkistrodon piscivorus) and the copperhead (Agkistrodon contortrix).

The fourth venomous snake is not a viper but an elapid—the same family of snakes in which you will find cobras and mambas. That might make them sound quite dangerous, but the coral snake is considered by many experts to be the most docile of the four venomous snakes in this area. They are also comparatively easy to identify due to their bright colors (“red and yellow kill a fellow”).

How would one go about learning to identify the four venomous snakes in the San Marcos area? Here are some suggested resources to get you started:

Knowledge of Nature makes you feel safer. When you can quickly rule out the four venomous snakes of Central Texas when you run across a snake on the trail, everyone present—including the snake—usually feels safer immediately. You’ll also contribute to a culture of snake education instead of a culture of snake fear, and this will mean fewer unnecessary snake deaths. Once you get to know these four snakes well, it will also be easier to tell when you’re looking at a nonvenomous mimic. The banded water snake, for instance, mimics its venomous cousin, the water moccasin, and meets an early death all too often for that reason.

One of the things you will come to know when you learn to identify these four types of snakes is in what kind of environment you’ll find them. For example, rattlers are often found in rocky outcrops and fields, moccasins in and near the water. Copperheads and coral snakes are often found amongst leaf duff in the woods or in a lush yard where many rodents, amphibians and insects might also be living. Knowing where you might find these cousins means you’ll be more likely to spot them sooner, thereby avoiding an unfortunate surprise interaction.

Should you come across a snake in the wild or in your yard, here’s what you can do to avoid conflict. Let’s first talk about appropriate outdoor apparel. Many folks love to beat the heat by wearing a tank top, some fast-drying shorts and some Chaco sandals when they’re out exploring Nature. As comfortable as it may seem, a person dressed this way is exposed to all manner of injury. A wide-brimmed straw hat, long sleeved cotton shirt, cotton pants and tennis shoes or hiking boots will save you not only a lot of money on sunscreen, it will also save you from all manner of cuts, scrapes, scratches, stings, burns, bites, bruises and more.

Now that you’re appropriately dressed, you’ll need the rest of your gear. Every snake safety kit needs a working and fully charged cell phone. You also need to take as much water with you as is reasonable to carry, as always.

So what should you do if you encounter a snake? First consider how far away s/he is. More than two meters? Or is the snake up a tree? If either of these is the case, simply back away slowly and all will be well.

In the unfortunate event of a bite, immediately call 911 and tell them your location. Commit to memory whatever distinguishing features you can about the snake so first responders will have a better idea what they’re dealing with. Sit or lie down in the shade and try to keep your heart rate as normal as possible. Do not make or use a tourniquet; allow the body’s lymphatic system to dilute and filter the venom as much as it can and slowly sip your water to keep your body hydrated. Don’t try to get back to the trailhead or your car; simply wait for help to arrive.

It’s a truly amazing journey to learn about snakes and how we can safely live alongside and even interact with them. Doing so can not only keep you feeling more secure out in Nature, but it will hopefully ignite a passionate desire to protect these reptilian cousins. They could certainly use more allies and fewer enemies.

Another way to learn about the snakes of Central Texas would be to take an educational hike with the author of this article, San Marcos naturalist Megan Bonnett:  https://m.facebook.com/profile.php?id=103089801312678&ref=content_filter

Together you can choose a trail in the area to explore and talk about local flora and fauna, and much more, along the way.

Written by Megan Bonnett, a biologist, naturalist and outdoor educator.