This month, the San Marcos Greenbelt Alliance (SMGA) is celebrating its 20th anniversary. In 1998, San Marcos had a string of lovely parks along the San Marcos River and some neighborhood parks, but it had no greenbelts, and no nature preserves or large natural areas.

SMGA grew from an effort to prevent the construction of townhouses on nine acres of beautiful land on Prospect Street, and to preserve the site as parkland. Christine North, who lived across from the site, enlisted a group of supporters, including Dianne Wassenich, the director of the San Marcos River Foundation, members of the newly formed Hays County Master Naturalists, and others. While working toward the establishment of what is now Prospect Park, the group began identifying other areas around the city that they thought should be protected.

They also successfully applied for National Parks Service (NPS) assistance. Inga VanNynatten of the NPS brought experience and discipline to the local group, helping them to focus on the steps needed to achieve their immediate goals, and to consider long-term goals as well.

In May, 1998, before the group even had a name, North had suggested to the SM City Council that a “greenbelt loop” be developed around the city. As their main long-term goal, the fledgling SMGA adopted the creation of a contiguous greenbelt loop around the city, connected to a line of parks along the San Marcos River to its confluence with the Blanco, and up the Blanco from there. These two areas were drawn on a map and the “Loop and Check Map” became one of the main planning documents of the new organization.

Eventually Prospect Park became San Marcos’ first “Ecologically Sensitive Park.” It was specified as a natural area that would remain mostly in its pristine condition, without playgrounds, picnic tables or other intensive development.
Another early SMGA project was the protection of 21 acres of Schulle Canyon, which were also slated for townhouse development. With strong support from the surrounding neighborhood, the Schulle Canyon property was traded to the City for some land the City owned near the old Lowman Airport.

The 2000 San Marcos Parks & Recreation Master Plan listed 35 acres of “Environmentally Sensitive Parks:” Prospect Park, Schulle Canyon and five acres west of Sessom Drive and a total of 214.8 acres of City Parkland.
In 1999, San Marcos developer Randall Morris contacted SMGA vice-president Sherwood Bishop (currently chair of the SMGA Fundraising Committee) with a proposal. Morris owned 58 acres on Old Ranch Road 12, west of Craddock. Part of it was zoned for commercial development, and the rest for single-family homes. Morris suggested building apartments on 17 acres and donating the remaining 42 acres as parkland. Bishop and Dianne Wassenich negotiated with Morris. He agreed that the number of apartment units would be limited to the number of homes the property was already zoned for, there would not be any commercial development, and he would also add a strip of land that would give the parkland some RR12 frontage. It was a controversial proposal: no one wanted more apartments built in the area. Wassenich pointed out that the residential units would result in much less impervious cover than an equal number of single-family homes, and that, with no commercial development, the traffic impact would be much less. Bishop stated, “If we can get greenspace here, it would be possible to have a greenspace corridor all the way to Sink Creek.” Morris was criticized by some of his fellow developers for what they saw as being overly generous. The dedication of the 42 acres of the Ringtail Ridge Natural Area not only more than doubled the City’s greenspace acreage, it was also an important step toward developing the “alliance” that SMGA envisioned. City staff, like City Biologist, Melani Howard, SM Council member Jane Hughson, as well as Hays County and TX State University staff were also supporting the growing conservation efforts.

In 2000, the City established an extra-governmental Greenspace Planning Committee. The original members, North, Wassenich, Bishop & Howard, along with the City’s deputy City Manager, Laura Huffman, Director of City Planning, Ron Patterson, the Director and Assistant Director of the City’s Parks & Recreation Department, Rodney Cobb & William Ford, Scott Walker of the Planning & Zoning Commission, and Jenni Hammer of the Trust For Public Land were soon joined by Kathryn Nichols of the National Parks Service, Paula Power of the US Fish & Wildlife Service, Jo Ellen Korthals of the Council of Neighborhood Associations, and San Marcos Fire Chief Todd Derkacz. Derkacz would also eventually serve as President of SMGA for over a decade.

The Greenspace Planning Committee developed criteria for future greenspace acquisition, mapped out possible greenways and helped develop the City’s first Greenways Master Plan. The increasingly collaborative nature of conservation efforts helped SMGA, SMRF and the City win grants for environmental protection, trail development and land acquisition.
In 2001, the City’s greenspace acreage exploded, with the acquisition, after long negotiations and much lobbying, of several parcels totaling 453 acres, as habitat mitigation property for the construction of Wonder World Drive. The property, which adjoined Prospect Park, is the core of what is now known as the Purgatory Creek Natural Area. Since 2001, it has more than doubled in size.

In 2002, the Holt family donated the 81-acre natural area along the Blanco River now known as Blanco Shoals.
In 2004, plans were announced to construct a hotel, a conference center and a large mixed-use development on 251 acres of the San Marcos River headwaters above Spring Lake. After many objections and much lobbying by citizens, the City Council denied the project by a 4 to 3 vote. SMGA, SMRF and others began a long effort to raise funds to acquire the property as a permanent preserve. They met with Hays County Commissioner Will Conley, who convinced Commissioners Court to commit the first $200,000 toward the purchase price. This was used for a matching grant from the Edwards Aquifer Authority. Eventually donations were made by the property owner, Terry Gilmore, Texas Parks & Wildlife, the U.S. Department of the Interior, the Meadows Foundation, Houston Endowment, the McCoy Foundation, the Lower Colorado River Authority and the Guadalupe-Blanco River Authority. When the City set a $2 million bond election for the remaining funds, SMGA members and many others established a lobbying and outreach organization, “Yes, Prop 1!” to work for voter approval. They printed & distributed over 5000 color flyers and posters and spoke to dozens of community groups. The bond election passed overwhelmingly, and the City was able to acquire the property in 2007.

The 2010 Parks & Recreation Master Plan listed 1699 acres of parkland, including 1,436 acres of Greenspace. Today, the Purgatory Creek Natural Area and adjoining parkland are over 1000 acres alone. The exact acreage of the City’s parkland is difficult to determine, partly because it is growing so fast and partly because of the complex process of parkland acquisition and dedication, but the total is now somewhere between 2000 & 3000 acres.

In 2017 alone, the City added about 50 acres to the Purgatory Natural Area and is now seeking funds for another 150. The La Cima development has dedicated (or soon will) 91.5 acres that will extend along Purgatory Creek from the current preserve to the County’s 700-acre habitat conservation preserve. The City also began buying 102 acres on Sink Creek and applied for a Texas Water Development Board loan to buy the 249 Acre Millican Tract.

With the purchase of those two parcels, the “greenspace corridor all the way to Sink Creek” from Ringtail Ridge will be complete. Most of the land for the greenbelt between Ringtail Ridge and Purgatory is also now City parkland, and the entire greenbelt around the west side of San Marcos is almost complete. Only one piece is missing, the Elsik tract. SMRF has an option to buy it and we are all looking for possible funding.

The discussion above has focused on City parkland, but County parks and Texas State University parks & open spaces are also growing in size and helping to integrate the area greenbelt network as well.

Three versions of the Loop & Check Map, for 1998, 2005 & 2017, show the incredible growth of San Marcos’ parks & greenways. The long-term goal now is for multiple, interconnected greenbelts that will not only connect San Marcos’ parks and preserves, but also its neighborhoods, downtown and the University.

Besides working to help acquire land for natural area, SMGA also constructs trails in the preserves and maintains them in other ways. SMGA Trail Crews have logged thousands of hours of volunteer, but often highly skilled labor. They have built well over 22 miles of trails, positioned boulders for natural seats, erected kiosks, trail signs, distance markers, benches & trash cans. SMGA also conducts guided tours and educational activities, such as bird walks, bug walks and other outdoors events for children & adults. SMGA’s web site, smgreenbelt.org, provides maps and other information to local citizens and visitors from around the world.

SMGA also provides support to groups from other central Texas cities who wish to develop their own greenways, trails and/or local organizations. It has held trail planning & building workshops as well and other educational events as well.

Over the past year, SMGA initiated a project to develop a greenway trail corridor from San Marcos through Kyle and on to the Violet Crown Trail which is growing westward from Lady Bird Lake near downtown Austin. This project, known as the Emerald Crown Trail, has now become an independent partnership of SMGA, Hays County, and the Cities of San Marcos, Kyle & Buda, along with numerous other stakeholders.

The San Marcos Greenbelt Alliance will celebrate its 20th anniversary at its annual meeting on February 11, from 3:00-5:00 PM at the San Marcos Rec Hall, 170 Charles Austin Drive. 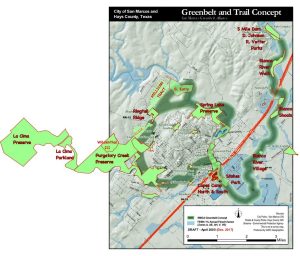 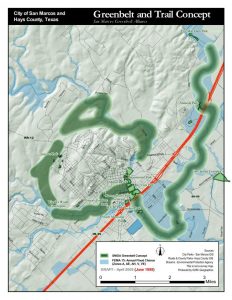 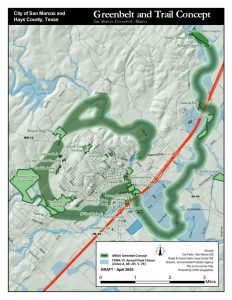