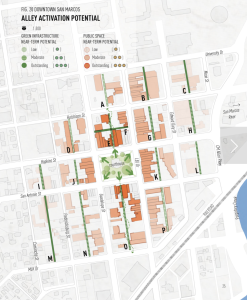 When the San Marcos Green Alley Initiative was first proposed more than two years ago, the San Marcos Greenbelt Alliance was one of its earliest supporters. On April 4, two representatives from the project—environmental engineer Elizabeth Arceneaux and Meadows Center Program Coordinator for Watershed Services Aspen Navarro—presented an update to the SMGA board.

While there’s nothing new about alleys in urban settings, the idea of green alleys was born only about two decades ago. Beginning in Chicago, the movement was initially an attempt to address storm runoff, localized flooding, and industrial pollution. With 1,900 miles of alleys, all with nonporous surfaces, the city typically responded to deteriorating conditions by simply reconstructing the alley using the same nonsustainable materials.

In 2004, however, the Chicago Department of Transportation launched a pilot project to test several permeable surfaces. The main challenge was to find a material that could support vehicular traffic while allowing water to percolate into the aggregate below. According to the Federal Highway Administration, “The breakthroughs and successes from these pilots provided an immediate increase in the department’s confidence in pervious pavements. Initial doubts were replaced by well-tested specifications and on-the-ground examples.”

Fast forward almost 20 years, and what was begun in Chicago has spread to cities throughout the country. Today, the impetus for building green alleys has moved beyond controlling storm runoff to include more aesthetic and social concerns as well, namely the desire to create outdoor gathering spaces, diverse cultural opportunities, pedestrian corridors, and attractive commercial venues that are environmentally friendly and sustainable. In short, the effort is to take uninviting, underused areas of a city and turn them into assets that promote a sense of community and municipal pride.

How does San Marcos fit into this picture? Like many mid-sized cities with historic downtowns, San Marcos was platted with a network of alleys to facilitate delivery services, trash removal, and utility construction. Today, 16 of those alleys remain, and most are still used for those purposes, in addition to parking and transportation. Also like alleys in other cities, most of those in San Marcos remain unnamed.

The one notable exception is Kissing Alley, the name of which was officially recognized by the City in 2017. As the San Marcos Green Alley Initiative proposal notes, “This wonderful act of creation has since spurred a larger dialogue about alleys generally in San Marcos—where alleys exist, how alleys function, who alleys serve today and in the future, and what could be altered or added to them so that they support not only downtown businesses but also other city-wide needs and systems.”

Serendipitously, interest in this project has developed at a time when the City of San Marcos is already looking to improve the downtown’s utility infrastructure. And, efforts are also on the increase to ameliorate runoff into the San Marcos River, a fact that explains the involvement of Aspen Navarro, Program Coordinator for Watershed Services at the Meadows Center.

As it has elsewhere, the green alley conversion in San Marcos will begin with a pilot project to determine the feasibility and value of such a transformation. Not surprisingly, that first effort will take place in Kissing Alley, which over the years has evolved into a site for community and cultural events. The City’s capital improvements project, set to begin in 2024, already entails removing the existing asphalt, burying utility lines, and installing permeable pavers. It isn’t much of a stretch to continue the makeover to include landscaping, seating, and other amenities. 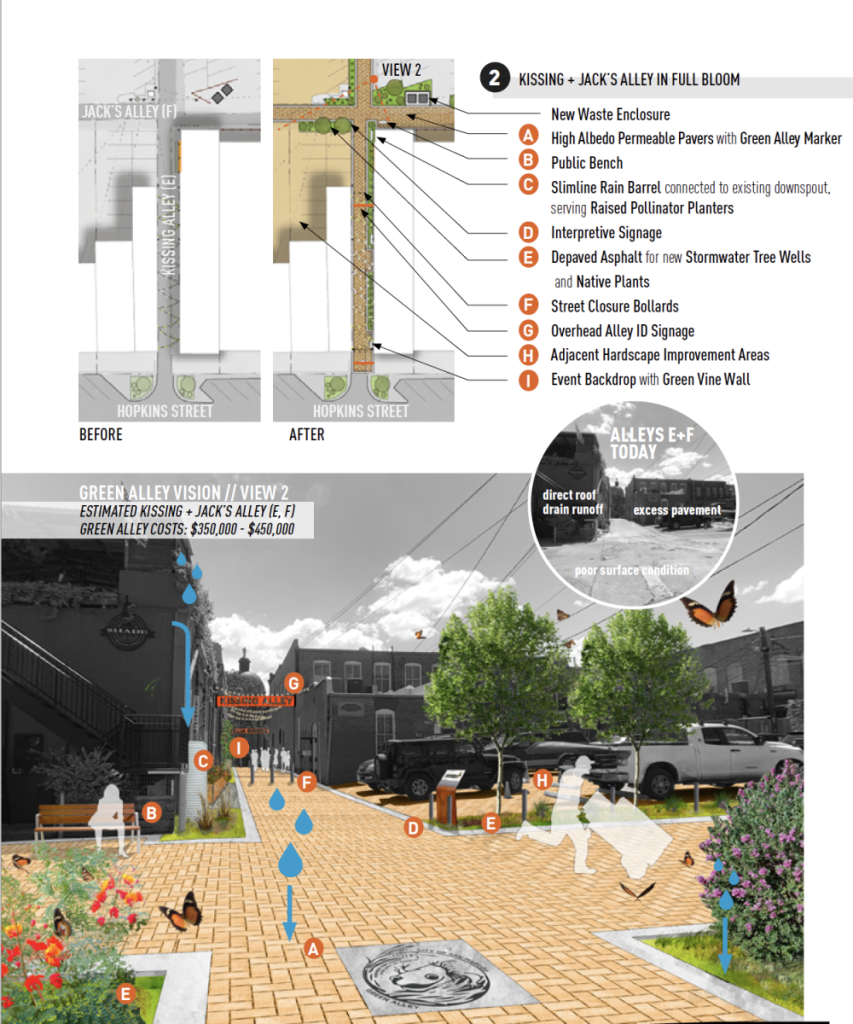 The potential payoff for converting the downtown alleys, all of which are city-owned, into green alleys is significant. “With a pristine river ecosystem just east of downtown,” notes the San Marcos Green Alley Initiative proposal, “growing demands for more livable, walkable environments, and increasing climate and social crises, downtown alleys in San Marcos are revealed through this initiative to be powerful stormwater tools—with the capacity to capture nearly half a million gallons of stormwater and filter over 10,720 pounds of total suspended solids a year if converted to green reconstructions. This potential is further augmented by the social and economic benefits that can result from the quality of improved public space as further demonstrated by this visioning effort.”

Planting trees, shrubs, and groundcovers in these formerly barren cityscapes can have the added benefit of increasing biodiversity downtown and lessening the “heat island” effect. While an asphalt surface might reach 165-200 degrees, that same area covered in concrete pavers would top out at 110 degrees. Shading and converting that same space to soil and vegetation would have the dramatic effect of dropping the temperature to 75-95 degrees. It would also assist in cleaning the air and reducing levels of CO2.

The San Marcos Green Alley Initiative proposal ends on this positive note: “Most of San Marcos’ existing downtown alleys are not particularly well cared for today. But the emergence of Kissing Alley, as well as the recent spread of alley murals in San Marcos, demonstrates general community desire to realize greater potential of this important network of public right-of-way. Similarly, the long, outstanding commitment of river-oriented organizations reveals a deep concern and care for the local environment. These indications of community desire, combined with a review of the existing alley conditions and their potential for delivering green infrastructure and enhanced public space, provides reason and value for the initiation of a green alley network.”

Written by Susan Hanson, Outreach Committee chair and editor of The Loop.