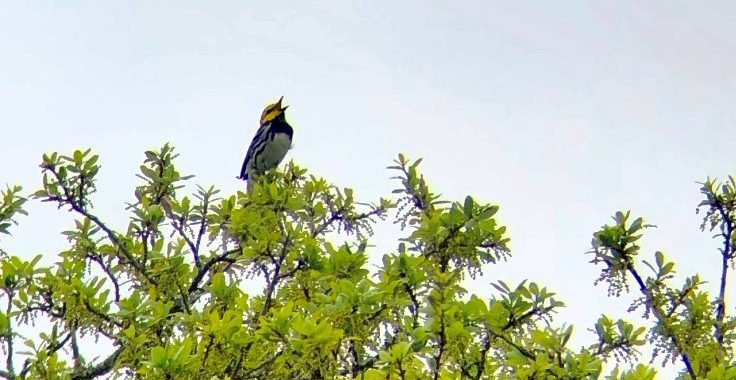 Trails in the northern half of Spring Lake Natural Area and Paraiso in Purgatory Creek are closed for three months during the best wildflower viewing. Spring is also the prime nesting season for the endangered Golden-cheeked Warbler. Endemic only to the Hill Country the small songbird struggles to mate and raise a family. So how many of the warblers are being protected?  The answer was pursued during the last three years by Texas State University students. 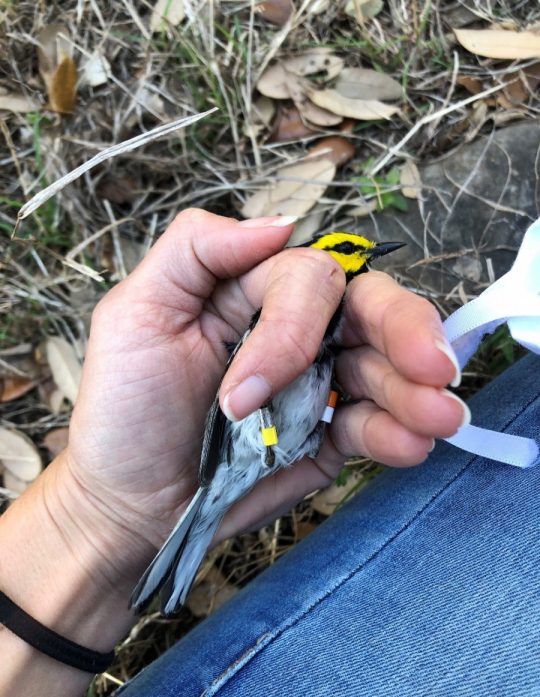 With more than 900 hours of volunteer survey efforts in 2019, they detected a total of eight unique GCWA males during the Freeman Center (TxState property) and City of San Marcos Parks surveys – 6 at Freeman, 1 at Uber Purgatory, and 1 incidental at Upper Purgatory Creek Preserve. They did not detect any GCWAs at Spring Lake Preserve for a third year in a row, though information from eBird states that warblers have been spotted in the vicinity:  these could have been post-breeding individuals that tend to wander as the season comes to an end, and therefore their detections do not equate to warblers breeding in the neighboring preserve. The surveyors assigned all detected male GCWAs a unique number

The surveys at the Freeman Center and on City of San Marcos properties are continuing to provide insight into the GCWAs behavior and habitat utilization in southeastern Hays County. Though able to detect only eight unique male GCWAs during 2019, they were able to confidently confirm GCWA reproductive success for the first time on the Freeman Center. Warblers were recorded successfully nested on both the Freeman Center and City properties in the past, but had no luck locating females or fledglings during the 2017 and 2018 seasons. Therefore, witnessing a fledgling GCWA being fed by an adult male is a noteworthy observation. It could signify that females are recognizing that the habitat is suitable for reproductive purposes in these locations, or it could mean that the habitat in surrounding areas is diminishing, pushing females and males alike into sub-par vegetation. Either way, it is a positive and hopeful detection that sheds light on the possible importance of the Freeman Center and City of San Marcos properties for the persistence of the species as a whole. — LJ