Fall in Central Texas may lack the drama of autumn in New England, but it’s not without its pleasures. Indeed, a host of natives wait until September to bloom—or to bloom most spectacularly—making them an important food source for migrating butterflies and bees putting honey away for the winter. Many of these plants can be found in our natural areas, offering trail users a wonderful surprise. 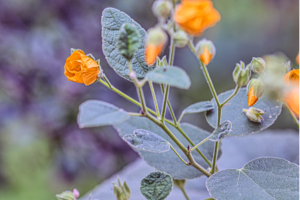 One of the more obvious flowering plants this time of year is velvet leaf mallow. Though it can start blooming in June, it’s at its best right now. According to the National Wildflower Center, “Velvet-leaf mallow is striking for its large, heart-shaped leaves and their luxurious texture and for delicate orange flowers. Over the course of the growing season, the plant may become bare underneath. The plant looks attractive with white mistflower, lantana, or big muhly planted in front of it.” Indeed, those velvety leaves, which feel great to the touch, are the main clue that you’re looking at Allowissadula holosericea and not one of the many other plants that present with yellow or gold flowers this time of year. 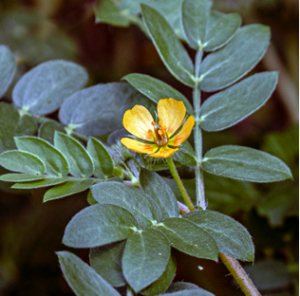 A plant you may find growing in drier, sunnier locations than velvet-leaf mallow prefers is Kallstroemia parviflora, which goes by the unfortunate name of warty caltrop or small-flowered carpetweed. This bloom is also an orangy-yellow, sometimes making it difficult to distinguish from fall flowering plants such as Lindheimer’s/velvet-leaf and twoleaf sennas.

One of the natural area’s most dramatic bloomers right now, thanks to recent rains, is Texas kidneywood, which bears fragrant spikes of small white flowers. This shrubby plant, which grows up to 10 feet tall, is highly beneficial to bees and butterflies, particularly the larva of the dogface butterfly. What makes kidneywood so striking right now is not only the profusion of flowers on each plant, but also its sheer abundance along the trails. 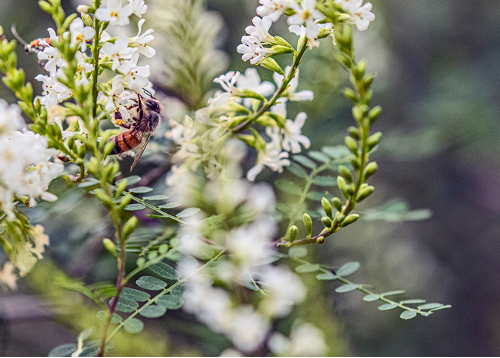 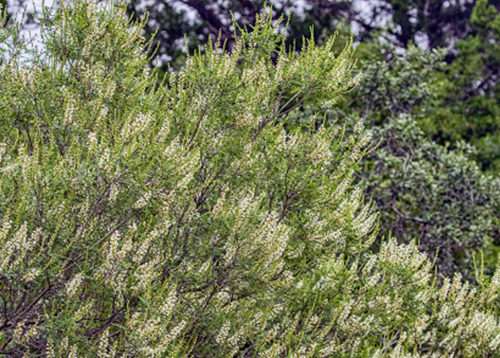 Another white-blooming shrub or small tree you might encounter in the natural areas is evergreen sumac. Unlike the plants described previously, which can bloom multiple times in the summer and fall, depending on rain, evergreen sumac flowers only once, with berries appearing soon after. Although it lacks the fragrance of Texas kidneywood, evergreen sumac is equally attractive to butterflies and bees.
​​
Probably the least familiar of the plants profiled here is brasil, also known as bluewood Condalia. Though it’s not a fall bloomer, brasil can be identified by its berries, which at this time of year can range in ripeness from green to red to black, all on the same plant simultaneously. As the National Wildflower Center describes it,

“The shrub [or small tree] has dense foliage and the new leaves are a fresh bright green. Each branch is stiff and ends in a sharp thorn. It is a good wildlife habitat plant providing dense cover and fruit . . . eaten by the gray fox, raccoon, and various birds.” In short, brasil is a highly beneficial plant in the Central Texas ecosystem. It may not be noticeable on the trails, but you can be sure it’s there. 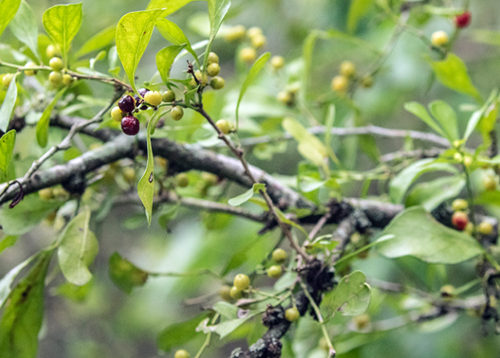 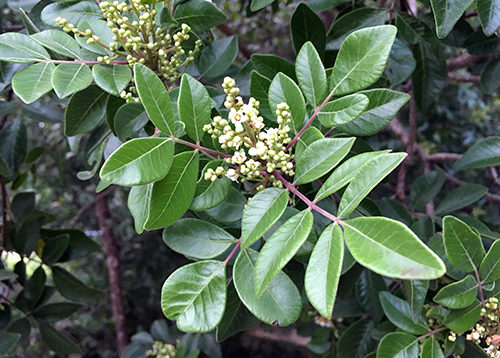 ​Written by Susan Hanson, a member of the SMGA Board and chair of the Outreach Committte.