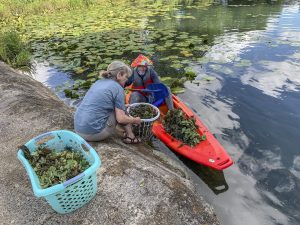 Rachel taking a basket of plants from a kayaker

On a recent Saturday, while heading to Spring Lake to look for photo opportunities, I came across a group of kayakers working in the slough near the old golf course. Noticing Rachel Sanborn, Director of Operations for the River Foundation, removing something from one of the boats, I asked my husband to pull the car over so I could see what was going on. I’m kind of nosey that way.

As it turned out, the kayakers were Stream Team members, accompanied by Aspen Navarro from the Meadows Center. They, along with others from the River Foundation, were removing invasive water lettuce (Pistia stratiotes) before it could float downstream. Rachel’s role was to collect the baskets full of plants as the kayakers brought them in and then drive them down to a staging area near the boardwalk. There, additional volunteers would separate the water lettuce from any water hyacinths that might also have been collected. More on that later. 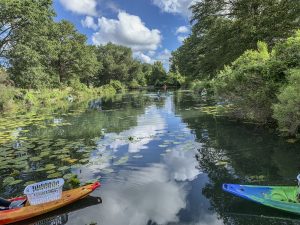 Kayakers at work in the slough

So why water lettuce? Though it may not seem as problematic as water hyacinths, this exotic plant can have the same kind of impact on our river. According to the Texas Invasive Species Institute, “Severe infestations block light to the water ecosystem, reduce oxygen levels, increase siltation, reduce suitable fish spawning habitat and restrict water flow and boating traffic.”

It’s unclear where water lettuce originated, though the TISI leans toward South America as the most likely source. A plant that’s able to reproduce rapidly, water lettuce can be found throughout the United States, where it invades lakes, ponds, and slow-moving streams. I have most often seen it in Upper Sewell between the two spillways, where there tends to be little current and the water is warmer. Removing the water lettuce before it can reach that point is definitely a good idea. 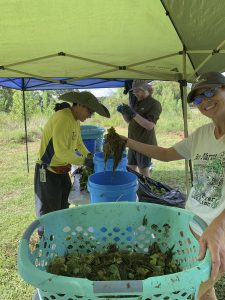 And speaking of good ideas, the reason for separating the water hyacinths from the water lettuce is that Professor Sangchul Hwang from the School of Engineering at Texas State University is looking for ways to repurpose water hyacinths into useful supplies, such as agricultural products for nitrogen fixing.

What does all of this have to do with the San Marcos Greenbelt Alliance? 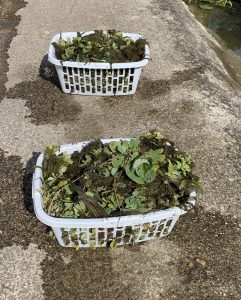 It’s simply a reminder that SMGA isn’t working in a vacuum; it isn’t working alone. Recognizing this interconnectedness, people who care about our sensitive ecosystem frequently participate in multiple environmentally focused organizations. A volunteer at the Discovery Center might also work at the San Marcos Aquatic Resources Center. A member of The Eyes of the San Marcos River might be part of the SMGA Trail Crew. A supporter of the River Foundation might also support the Texas Land Conservancy or the Hill Country Alliance.

The truth is that each of these does something a little different, and each does that one thing well. Yes, SMGA does a wonderful job of creating and maintaining trails, advocating for natural areas, and educating people about the flora and fauna that live in those areas. We can’t do this, however, without someone working to acquire that land. This is one of the roles the River Foundation has taken on in recent years. Similarly, those groups that work to protect the river rely on others to maintain recharge areas, prevent erosion, and keep trash and animal waste from washing into the river. That’s where SMGA comes in.

So yes, this article doesn’t focus on the San Marcos Greenbelt Alliance—at least not in the usual way—but it’s a reminder that it does indeed take a village to accomplish what we’re trying to do.

Written by Susan Hanson, chair of the Outreach Committee, editor of The Loop, and SMGA board member