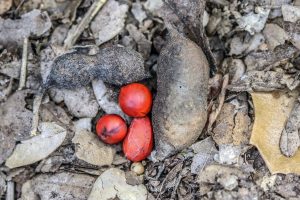 “Those take forever to come up,” a member of SMGA’s Team Flora said when I mentioned I was once again collecting mountain laurel seeds for volunteers to plant along the trails. I couldn’t disagree with her, though I was quick to add that I have a forest of saplings in our woods. They do come up. Eventually. In droves. But even then, mountain laurels are slow to grow; it usually takes them years to reach head-height, and a generation to become a substantial tree. In short, if you plant a mountain laurel seed today, you may not live to see the result reach maturity.

That might sound like a depressing thought, but it put me in mind of one of my favorite poems by one of my favorite poets, Wendell Berry. According to critic Christine Casson, “Manifesto: The Mad Farmer Liberation Front” is a sequence of poems published by Berry in 1973 “as a celebration of human connectedness to nature and as an accusation and directive for a society that lagged in its response to environmental and communal concerns.” It’s vintage Berry at his contrarian best. The poem skewers mindless materialism, a theme that always appeals to me, sometimes seeming to speak in riddles, a reflection of the paradoxes of life.

“Manifesto” begins with these lines:

“Love the quick profit, the annual raise,
vacation with pay. Want more
of everything ready-made. Be afraid
to know your neighbors and to die.”

Do these things, Berry warns, and you will become a faceless pawn, in thrall to those whose job it is to make you buy whatever item or idea they have to sell.

So what does that have to do with planting trees? Not a thing, I’ll admit; you’ll have to scroll down a good bit farther to find the lines that do. And here they are:

“Ask the questions that have no answers.
Invest in the millennium. Plant sequoias.
Say that your main crop is the forest
that you did not plant,
that you will not live to harvest.
Say that the leaves are harvested
when they have rotted into the mold.
Call that profit. Prophesy such returns.
Put your faith in the two inches of humus
that will build under the trees
every thousand years.
Listen to carrion — put your ear
close, and hear the faint chattering
of the songs that are to come.
Expect the end of the world. Laugh.
Laughter is immeasurable. Be joyful
though you have considered all the facts.”

Just for reference, a giant sequoia isn’t a particularly slow-growing tree, but it takes a very long time to reach maturity; at a maximum of two feet a year, it would require 150 years to reach 300 feet. And then, if you want to be around to see it die, you might have to wait 3,000 years. Those are numbers that don’t compute with me, but Berry’s sentiment rings true.

Planting trees isn’t something we do for ourselves. Neither is building trails, though we might enjoy using them for a while. We do these—and lots of other things—for our children, and the children that follow them. We do these things for the good of the Earth, in hopes that our actions might contribute somehow to the healing of whatever is broken.

As a teacher for almost 40 years, I know something about investing in the future. Regardless of the quality of their writing or their grades, I never knew what difference my work was making in the lives of my students. Every now and then, though, one would tell me. Often, it was something I didn’t remember saying or doing that helped them in some way. I found it better not to dwell on such things, not to worry if what I was doing “worked” or not. The good results, if there were any, would be down the road, possibly never even known to me.

And so we continue to plant trees. It is an act of hope, an act of defiance against whatever wants us to fear the future.

Whether it’s apocryphal or not, I don’t know, but the story goes that when Martin Luther was asked what he would do if he learned that the world was going to end the next day, he answered, “I would plant an apple tree today.”

May we all aspire to such a view.

Written by Susan Hanson, Outreach chair and editor of The Loop.