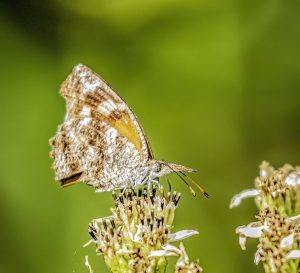 If you imagined you’ve been swarmed by clouds of small butterflies in recent weeks, well, you aren’t imagining. Depending on where you were in town, you may have encountered a phenomenon that occurs with some regularity in the Texas Hill Country—the emergence of American snout butterflies.

Also known as the snout-nosed butterfly, Libytheana bachmanii is so named for its obvious elongated mouthparts. As Bexar County entomologist Molly Keck admits, they have “a face only an entomologist could love.” In addition, unless you happen to be looking at the butterfly while it’s feeding, you might miss the fact that its wings are attractively patterned orange and dusty black. Flying by en masse, the creatures look more like a wave of gray-brown.

Some common questions about the snout butterfly: 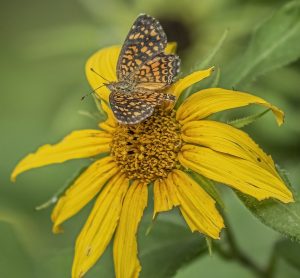 How large is this butterfly?

What does it eat?

The caterpillars feed primarily on hackberry leaves. As the photos illustrate, adult butterflies are attracted to wildflowers and fermenting fruit.

What is its life cycle?

According to Texas A&M’s AgriLife “Field Guide to Common Texas Insects,” “Winter is spent in the adult stage. Adults apparently mate during the night. Females lay eggs on host plants. Caterpillars hatching from eggs develop through several caterpillar stages (instars) and a pupa (chrysalis) to adult in 15 to 17 days. There may be up to four generations per year.”

Not really. When so many emerge at the same time, it may appear that a great number are passing through, much the way monarchs do. As Bexar County entomologist Molly Keck explains, “They are simply flying to look for food and a place to mate and lay eggs.”

What determines their numbers?

Weather. In years when we’ve had good rains—and thus good growth of hackberry trees—population numbers will boom. Also, in a mild autumn, there’s likely to be more than one emergence.

What role do they play in the ecosystem?

Like all nectar-loving insects, they help with pollination and serve as a food source for birds.

Will we see them next year?

Though we can’t predict their numbers a year in advance, we’ll likely see them again.