Nothing says summer like sunflowers. This time of year, you’ll find them in fields, in flowerbeds, and, of course, in the Greenbelt. Ubiquitous as they are, however, most people know—or think they know—only a few facts about them: 1. Sunflower seeds taste good. 2. Birds like them. 3. Sunflowers follow the sun. 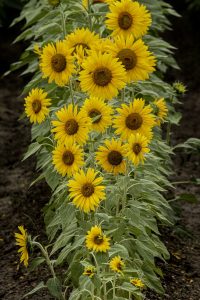 All true, more or less. Sunflower seeds do indeed taste good—to many people—and they have numerous health benefits as well. Loaded with too many nutrients to name, they help reduce inflammation, boost immunity, contribute to heart health, boost brain function, and more. Sunflowers are also prolific, with a single large head producing around 2,000 seeds.

Point two is true as well, provided you’re talking about a certain type of bird. Put sunflower seeds out in a feeder, and in our part of the country, you’re guaranteed to see cardinals, blue jays, chickadees, titmice, and even some types of woodpeckers, among others. Not every species possesses the kind of bill required to break the hard shell, but using sunflower hearts—that is, shelled seeds—will guarantee an even great variety at your feeder. Note: Though birds will eat any type of sunflower seed, they prefer the black oil seeds that you find in most seed mixes. Humans, on the other hand, typically eat the larger striped seeds.

What about the idea that sunflowers follow the sun? That, too is true, but only when the plants are young; once they reach maturity, the flowers face only one direction, east. Citing research published by the journal Science, a 2016 piece on NPR explained the phenomenon thusly: “T[he young plant’s sun-tracking (also called heliotropism) circadian rhythms – the behavioral changes tied to an internal clock that humans also have, which follow a roughly 24 hour cycle. A young flower faces east at dawn and greets the sun, then slowly turns west as the sun moves across the sky. During the night, it slowly turns back east to begin the cycle again.”

Why does this behavior stop? Simply put, because the plant quits growing. “The researchers found that the plant’s turning is actually a result of different sides of the stem elongating at different times of day,” the report noted, adding that “’[g]rowth rates on the east side were high during the day and very low at night, whereas growth rates on the west side were low during the day and higher at night.’” Once that growth, or elongating, stops, so does the sun-tracking. Mystery solved.

So what else is there to know about sunflowers? Quite a bit, actually. When we speak of sunflowers, we’re usually referring to Helianthus annuus, the common or annual sunflower. And while that’s what you’ll see out on the trails, a quick search for Texas sunflowers in the National Wildflower Center’s database will turn up 39 varieties. 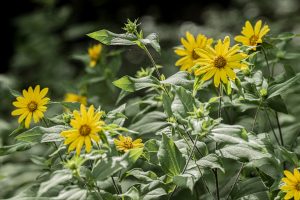 For example, the sunflowers blooming in my own front yard right now are roughleaf sunflowers (Helianthus divaricatus). Ordinarily a late summer bloomer, this hardy perennial is getting an early start this year, no doubt because of the recent rains. I first encountered roughleaf sunflowers growing amid rocks above the Blanco River.

No soil? Check. No water? Check. Intermittent sun? Check. I figured I could offer those conditions quite easily. And sure enough, the single start I took home years ago has morphed into several very healthy patches that have provided plants for more than a few friends. Unlike the common sunflower, this variety spreads not only by seeds, but also by rhizomes, making it easy to pull or dig it out and give away. That root system also means that roughleaf sunflower is a good choice for stabilizing slopes. Drought-resistant, unpalatable to deer, able to bloom in sun or shade, happy in thin soils, host plant to painted ladies and checkerspots, not susceptible to disease or pests—what more could a gardener want?

Flip this list of conditions on its head and you’ll get the ideal circumstances for yet another perennial, maximilian sunflower. Granted, this sun-loving prairie plant can tolerate limestone-based or sandy soils, but it prefers a more moist environment. This is why you’ll see Helianthus maximiliani blooming in ditches and other low places in the fall. At anywhere from 3 to 10 feet tall, with flowers running up and down the main stem, this plant puts on a dramatic show when it grows in colonies, which it typically does.

On the down side, maximilian sunflowers, often referred to as maximilian daisies, are quite tasty to deer and other grazers. But as a plus, the plant’s flowers and seeds are also loved by pollinators and birds. Maximilian sunflowers require virtually no care, spread easily from seed or by plant division, and bloom at a time of year when most other wildflowers have disappeared. Another good thing: You may or may not find this plant in your local nursery, but it’s readily available online from places like Native American Seed, which sells both seeds and roots.

Another ubiquitous perennial sunflower is sunflower goldeneye (Helianthus dentatus), which has the odd distinction of being reclassified as Viguiera dentata. So is it a sunflower or not? I like to think that it is, though I wouldn’t want to be quoted on that. At the least, it’s a member of the aster family, meaning that it’s a close relative of any sunflower I can name.

It’s hard to say what I like most about sunflower goldeneye, also known as toothleaf goldeneye or plateau goldeneye. I first noticed this plant growing along Hunter Road many years ago, and I stopped to collect a start. From a single small clump came a swath of sunflowers that, with enough rain and sun, presents as a carpet of yellow across the width of our property every fall. Because this plant reproduces very easily from seed, it has escaped from our yard and made itself at home next door and across the street. The neighbors don’t seem to mind.

Besides being quite prolific, sunflower goldeneye is drought resistant (though it will grow taller and thicker with rain), unpalatable to deer, disease and pest free, happy in sun or shade, and long blooming. Bees and butterflies love it, and birds and other wildlife enjoy its seeds. The only negatives: Thanks to a strong root system, it doesn’t transplant well. It can get rangy in the fall, and look pretty ratty as you wait for the flowers to go to seed. And its thick growth habit can crowd out other desirable plants. Not enough to outweigh its advantages, in my book.

Sunflower goldeneye across the entire front of the Hansons’ property

Written and photographed by Susan Hanson, member of the SMGA board, chair of the outreach committee, and editor of the Loop