When I talk to any native plant enthusiast or gardener these days, the conversation invariably turns to one subject: What lived through the February cold blast, and what didn’t. As time passes, the answers are becoming more and more obvious.

My Bit the Dust list is a sad one. I’m still holding out hope that something will emerge at ground level, but as of today, nothing appears to be happening with any of my five Mexican olives, my one Texas ebony tree, and my huisache. Two of those olives were planted by my mother when we moved into this house 42 years ago. Currently taller than the house, they have survived in spite of freezing to the ground several decades ago, and, even more tragically, being cut down by a confused tree trimmer. I had instructed said tree trimmer to remove a pair of paper mulberries growing in the dog pen, and was later distressed to see that he took out the Mexican olives instead—this in spite of the fact that they were well away from the dog pen. I cried, presuming the trees were gone, but I was wrong. Now that some years have passed, the olives are just about as big as they were before the Unfortunate Tree-Trimming Incident. Whether they’ll make it back this time, however, I don’t know. And the same goes for the other three. 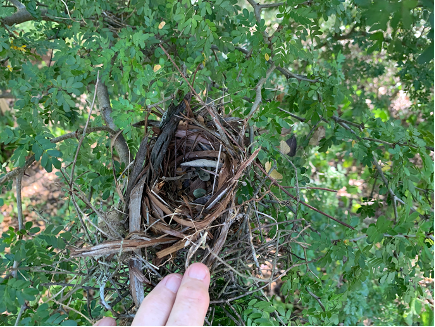 Texas ebony with a bird nest 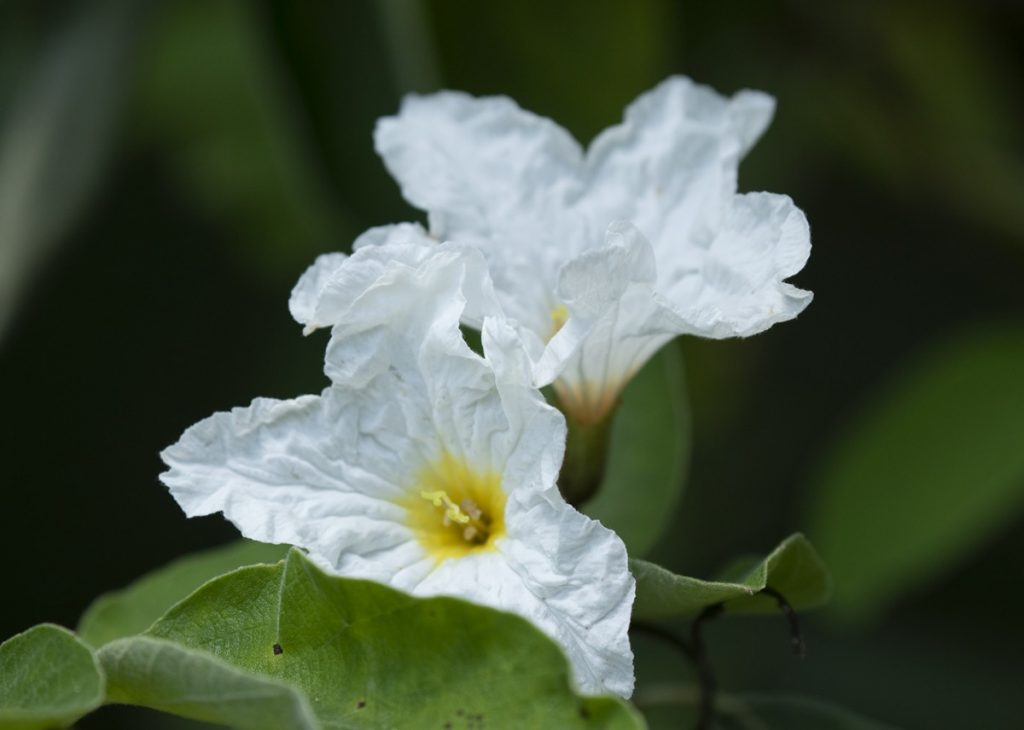 As disturbing as this potential loss is, I’m even more heartsick about my Texas ebony. No, these trees don’t grow here, and that’s precisely why I’m grieving today. Twenty or so years ago, I came home from a trip to South Texas with a handful of ebony seeds in my pocket. After throwing them out in the yard, I promptly forgot about them. Fast forward a year, two years, three years, and I found myself puzzling over a seedling that made its appearance under the Mexican olive tree out near the street. The tiny rounded glossy leaves weren’t like those of any other plant I had, though they reminded me of something that I’d seen before. So I left it there, which is what I always do with a new mystery plant I find.

Time passed, and it eventually became clear that what I had was a Texas ebony. Having forgotten what I’d done with the seeds, I had planted a Mexican olive almost on top of one of them. In spite of this misstep, though, both of the trees went on to do quite well. At the time of the February freeze, the olive was probably 20 feet tall, and the ebony was roughly 8, not bad for having to live in the larger tree’s shade.​ 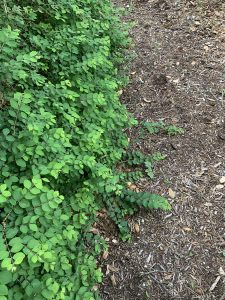 Coralberry encroaching on the path

One such native plant is coralberry (Symphoricarpos orbiculatus), a small deciduous shrub that I’ve planted around our yard as a groundcover in some places, and as an understory plant in others. Though it can reach a height of 6 feet, mine ranges from 1 to 3. In normal years, it produces tiny white flowers beginning in April, followed by coral pink berries—hence the name. While I’ve noted some dead branches here and there, I’ve largely been wowed by the explosion of new growth, stems shooting up from the center and tendrils creeping out across the paths.

Even more of a surprise was the unassuming little plant that took up residence in a backyard flowerbed last spring and never went away, not even during the freeze. This plant was the bush croton (Croton fruticulosus), also known as doveweed or goatweed.

Our huisache, too, isn’t showing any signs of life. Like the ebony and olive, it’s also out of its comfort zone here, but given how weedy it is, I’m more hopeful that it will come back. That may be from the roots, if I’m lucky, but huisache is a fast-growing tree and can potentially reach its current height of 15 feet in just a few years.

We have additional plants I’m concerned about—our orange tree and bay tree, both taller than the house—but there are others that have amazed me, and in a good way. These species not only survived the freeze, but they seem to have loved the ice and snow.

If you’ve never heard of this native, you aren’t alone. It’s an unassuming plant, a dull gray green that easily fades into the background. Although the National Wildflower Center notes that the bush croton’s habitat of choice is usually “ limestone hills, bluffs, canyons, or rocky ravines,” it lso grows in several places in my yard. And it grows in abundance on the trails. 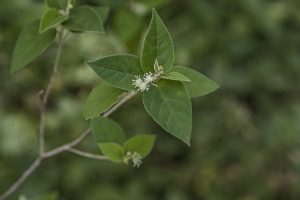 Writing in Trees, Shrubs, and Vines of the Texas Hill Country, Jan Wrede describes bush croton as a “low, deciduous, aromatic shrub, with slender, arched, and leafy branches.” Leaves have soft hairs on the underside, and produce a strong scent when crushed.

Wrede continues, “Bush crotons are not eaten by livestock (they are poisonous to livestock) and thus increase with overgrazing of other plants. Other croton species in Texas are host to the goatweed and hairstreak butterflies, and C. fruticulosus is probably also a butterfly host plant.”

The fragrant pale yellow or cream-colored flowers appear in April and May, followed by a three-lobed fruit in summer or fall. The seeds are of particular value to dove and quail.

Though you’re not likely to find bush croton in any nursery, even one that specializes in native plants, C. fruticulosus would make a fine addition to any landscape. It’s not showy, but it’s a survivor, resistant to deer and drought, and, unlike many natives, happy to live in the shade. Add that it’s a boon to wildlife, and you have a plant that’s of great benefit either at home or in the greenbelt.

Written by Susan Hanson, member of the SMGA board, chair of the outreach committee, and editor of the Loop