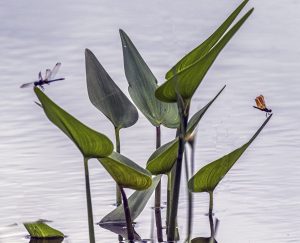 Ask me to ID a bird, and I will probably get at least within the ballpark: flycatcher, wren, confusing fall/spring warbler (my favorite categories in the old Peterson guide). Ask me about a native plant, and I might even get that right: pecan, oak, cedar elm. But point to a flying insect, and my options shrink dramatically: It’s either some kind of butterfly or a honeybee.

I may be exaggerating a little, but when I recently had an opportunity to participate in a photo workshop called “Pollinator Portraits,” I got pretty stoked. The idea of learning how to shoot quickly moving flying objects was most appealing to me. But equally attractive was the prospect of actually identifying some of these winged creatures, dragonflies in particular.

If you’ve ever visited the pond in Spring Lake Natural Area, you’ve probably encountered something you’d refer to as a “dragonfly.” I put that in quotation marks for two reasons. First, it may not be a dragonfly at all; it might instead be a damselfly, something different entirely. Second, using the term “dragonfly” is sort of like calling everything with feathers “bird”; anyone who really knows dragonflies wouldn’t be satisfied with stopping there.

We’ll begin with the easier question of the two. According to Treehugger.com, “There are four details that even the most inexperienced bug watcher can use to identify if the insect is a dragonfly or a damselfly. They are the eyes, body shape, wing shape and position of the wings at rest.” Given that I’m seldom quick enough to see the eyes, I’ve found the wing position to be the best clue: “Dragonflies hold their wings out perpendicular to their bodies when resting, like an airplane. Damselflies fold their wings up and hold them together across the top of their backs.”

Even when one of these insects whizzes by, you can probably tell which is which. Dragonflies are the C-5s of the sky, wide and sturdy-looking, while the damselflies are the U2s, delicate and sleek. Both have two pairs of wings, but those of the damselfly are the same size, tapering significantly where they connect to the body. The rear wings of the dragonfly, in contrast, are larger than the front

So what about the eyes? Again, both have large eyes, but the dragonfly’s take up most of the head, beginning at the side and meeting at the center of the face. In keeping with its more delicate appearance, the damselfly has a gap between its eyes, making it look a little less like a space alien. 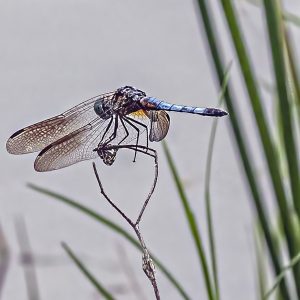 Once you determine that you’re actually looking at a dragonfly and not a damselfly, you still have a lot of work to do. Indeed, what you’re observing could be any one of the 160 species native to Texas, which has almost half of North America’s 327 species. To get beyond the suborder Anisoptera, to which dragonflies belong, you’d do well to pick up a copy of Dragonflies of Texas or, at the very least, take a look at Texas Park’s & Wildlife’s online Introduction to Dragonfly and Damselfly Watching. This resource will break the suborder into seven families: petaltails, darners, clubtails, spiketails, cruisers, emeralds, and skimmers.

So what are you most likely to see at the pond In Springlake Natural Area? According to TPW, “pond preferring species” include skimmers, darners, and clubtails. Indeed, those are the species we saw at the pond where my photo workshop was recently held. More specifically, we spotted blue darners, eastern amberwings, red saddlebags, and widow skimmers, all of which were lovely and exceptionally fast.

When is a good time to go out in search of dragonflies? Literally no time better than the present. Given our recent rains, there should be plenty of water and aquatic vegetation for dragonflies to feed and reproduce.

To study the life cycle of a dragonfly is to witness what Texas Parks & Wildlife calls “one of the true wonders of our natural world.” A quick synopsis:

As common as they seem, all is not rosy for the dragonfly. According to Texas Parks & Wildlife, “About 15 percent or one in six species of North American dragonflies are at risk of extinction in the foreseeable future, including some Gulf Coast species.” The reasons? “Draining of wetlands for agricultural use, destruction of streams by livestock and housing subdivisions, and clear cutting along riparian right of ways have pushed many of these species out of their homes.”

Not surprisingly, the solution posed by TPW is to conserve more of the dragonfly’s habitat:

“Encouraging the maintenance of riparian green belts and buffer zones can benefit these species greatly by reducing runoff and siltation while providing perching and hunting habitat.”

It’s good to know that the San Marcos Greenbelt Alliance is doing its part to make a home for these beautiful and fascinating creatures.

Written by Susan Hanson, member of the SMGA board, chair of the outreach committee, and editor of the Loop.