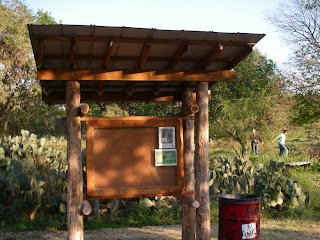 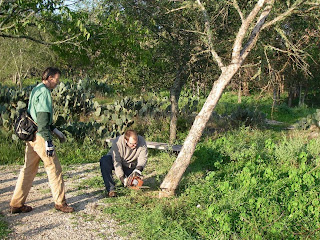 All that great rain following two years of drought meant a lot of work on all our trails. Ringtail Ridge benefited from the rain but suffered the loss of several hackberry trees at the entrance to the trail due to the drought.

Thursday morning regulars tackled several problem areas over the last couple weeks.  Weed-eating to open up the trails was necessitated by all the rain.  Johnson grass and horseherb especially benefited from the copious rainfalls.

Several hackberry trees were taken out by a crew of four as they chainsawed their removal.  The danger of falling limbs from these dead trees onto the trail determined their fate.  Plans are being made to
replace this scrub tree with something more appropriate to the landscape.  Restoration of the greenspaces is a continuing project of SMGA as reclamation from ranch land to aquifer-friendly and recreational use are key goals of the organization.

November 12th saw 11 members of the crew tackle several projects in a short time span.  While four crew members chainsawed the dead hackberry trees, two others worked at making fairways of the trails that were overgrown.

Another group of trail workers removed nailed boards in a legacy oak.  The damage done to the decades-old live oak remain to be seen at a time when the Hill Country suffers from oak wilt.  The disease is spread by nitidulid beetles which carry spores of the fungus from spore mats on infected trees to wounds on healthy trees, causing infection and death of the tree. ( http:// www.na.fs.fed.us/spfo/pubs/howtos/ht_oakwilt/toc.htm).

Still a fourth group of trail workers removed or trimmed ashe juniper and other invasive trees like chinaberry from the trail system.  Keeping ahead of a changing landscape brings satisfaction and a sense of accomplishment to the trail crew.  Not to mention, it’s a great way to get out and enjoy the scenery.
Join us any Thursday, just send us an email for weekly trail work updates. . . . Lance