Have you found yourself reluctant to visit Bastrop State Park? News has been widespread about fire damage to the park last September, and the park was closed to visitors until December. Jo Korthals and Mark and Ben Taylor recently overcame their reluctance, and found the park to be well worth a visit.

Areas of the park have reopened, and Jo, Mark and Ben were able to hike from the swimming pool area along the creek that leads up to the pond and nearby CCC-era cabins. Some areas of the park are accessible only along the paved roads. Damage from the fire is indeed extensive, and those familiar with the park will find that some areas are hard to recognize. An example of this is the hilltop lookout point. 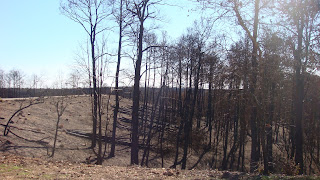 On the other hand, the destruction is by no means total. Some areas such as the old cabins were undamaged. Even the worst burn areas have pine trees with signs of life that are being preserved, and damaged trees and undergrowth are sprouting from the roots thanks to rainfall in December. 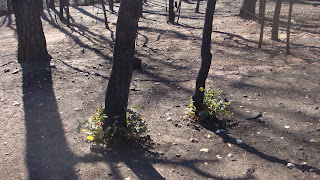 While a large area of the park remains closed to visitors, the main camping area near the swimming pool is open. A smoky odor lingers in the air, but ash on the ground has mostly been absorbed in the soil, especially in trail areas. It’s definitely worth it to overcome your reluctance and make the trip to Bastrop to see a beautiful natural area in the course of recovery.

Editor’s note: Texas Parks and Wildlife needs our support! Pay a visit to and support a state park during this pleasant winter season in Central Texas. Read more