SMGA is happy to announce the addition of a seventh natural area to the San Marcos Greenbelt. Known for years simply as the Buie Tract, these roughly 94 acres have been renamed River Recharge Natural Area (RReNA), due to the many karst features on the property.

Located at the north end of Bishop Street, a small portion of RReNA was initially intended to be developed as a private park for the Franklin Square neighborhood. But in the fall of 2021, the Franklin Square HOA donated that five acres to the City of San Marcos to be used as public parkland. This land is now the entrance to RReNA.

So how did a natural area miles from water end up with “River” in its name? While it may not look different from other nearby acreage, the Buie Tract—originally 153.15 acres along Wonderworld and Craddock—is especially important as a site where rainwater can percolate down to the Edward’s Aquifer and ultimately reach the San Marcos River. This process is made possible by the abundance of “holey” limestone, or karst, on the property. 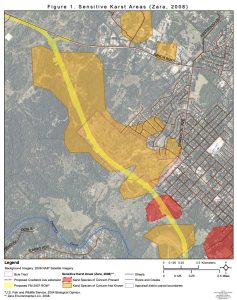 According to the Dec. 18, 2009 issue of the now-defunct San Marcos Mercury, “A 2003 biological assessment report for the Wonder World Drive extension identified approximately 31 karst features on the Buie Tract, as well as Anyway Cave and Technical Cave.” In a 2010 letter supporting the San Marcos River Foundation’s case against development on the Buie Tract, Tom D. Hayes, Science Director for the Greater Edwards Aquifer Alliance, cited the presence of numerous faults and caves on the property, stating, “The Buie Tract completely overlies a particularly sensitive area of the Edwards Aquifer Recharge Zone.” The map included here illustrates that fact.

Indeed, the Buie Tract has long been a source of controversy. First there was the Wonderworld Drive extension, completed in 2012. “’ “We couldn’t find a more environmentally sensitive area to go through,’” Sabas Avila, San Marcos’ assistant director of public services told the Austin American-Statesman on Sept. 1 of that year. Consequently, special care had to be taken in planning and constructing the project, most evident in the raised portions of the roadway and the lack of exits. A second contentious issue arose in 2009 when Craddock Avenue Partners proposed a mixed-use development at the corner of Wonder World and Craddock. Opponents included not only residents of adjoining neighborhoods, but also the San Marcos River Foundation, which was well aware of the site’s importance to water quality in the river. NPR reported on this dispute in August of 2013, citing local geologist Andy Grubbs, who had surveyed the tract for karst features and caves. “’The Buie Tract is out on the edge of town, and except for the people whose neighborhood was impacted, people don’t get the connection that if a sewer line breaks there, you won’t be able to swim in the river,’” Grubbs remarked. To make that point, Grubbs explained that “[d]ye tracing tests have shown that once water or other fluids enter recharge features on the Buie Tract, they reemerge 24 to 36 hours later in the San Marcos Springs.”

Former SMGA president and Planning & Zoning chair Sherwood Bishop recalls what happened next. “In order to avoid a vote from adjacent neighbors, which the developers realized they would lose, they created a development agreement (Dec. 2009) which divided the property into three separate tracts,” Bishop says. “There was much community anger over this tactic, and the City Council soon passed an ordinance outlawing it.” In the meantime, Craddock Avenue Partners gained support from their Franklin Square neighbors by offering them that five acres of parkland, and they went on to obtain City approval for a slightly scaled-down version of their original plan. As part of that agreement, they also dedicated 8.58 acres south of Wonder World as City-owned parkland (now part of Purgatory Creek Natural Area). 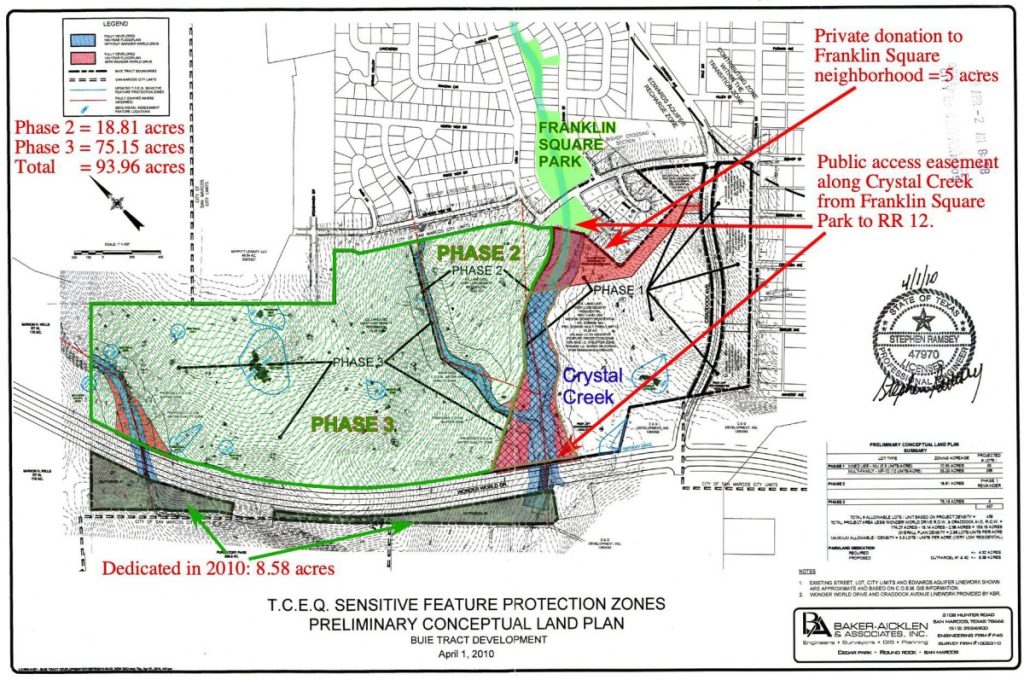 Although the developers ultimately succeeded in building the Cottages at San Marcos on Phase One of the Buie Tract, they were unable to use Phases Two and Three due to the discovery of many recharge features on that land. That property is now owned by the City and will remain protected as River Recharge Natural Area. The map below shows the location of RReNA, outlined in green. 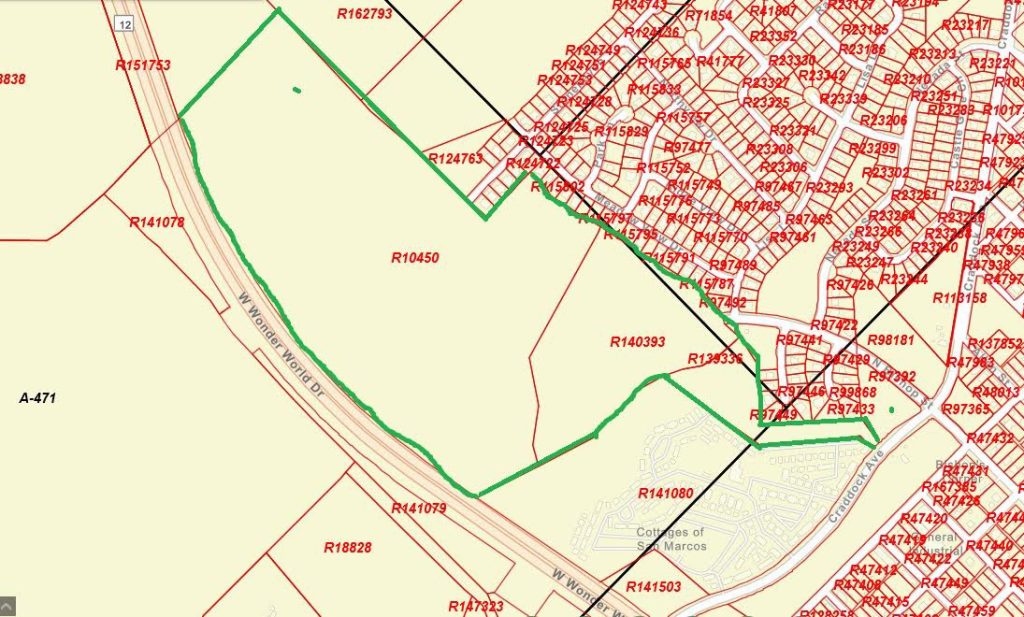 This newest natural area is “open for business,” but much work remains to be done there. “We have about 2.5 miles of trail laid out, though not all of it is built yet,” says Jon Cradit, SMGA vice president and member of the trail crew. Plans are also in the works to build an entrance kiosk with a map and other information, and to create an interpretive sign, much like the one at the dam in Purgatory NA, explaining the recharge process.

Members and friends are invited to River Recharge Natural Area at 9 a.m. on Saturday, July 16 to participate in a guided hike. See the separate story about this event elsewhere in The Loop. 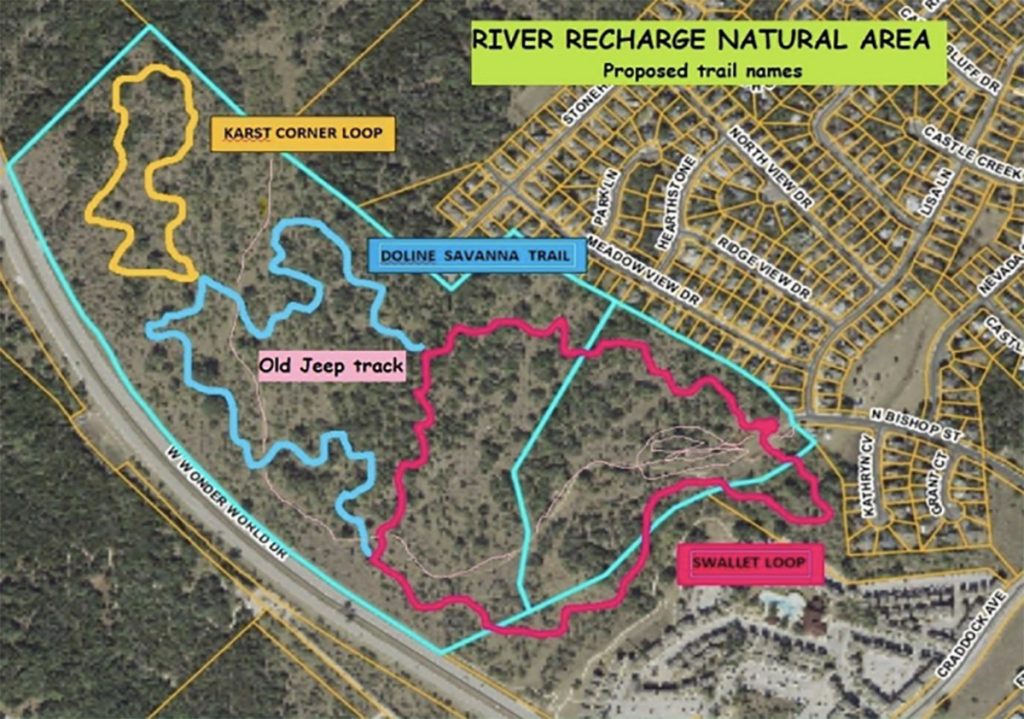 Swallet (rhymes with “wallet”): a sinkhole or opening through which a stream disappears 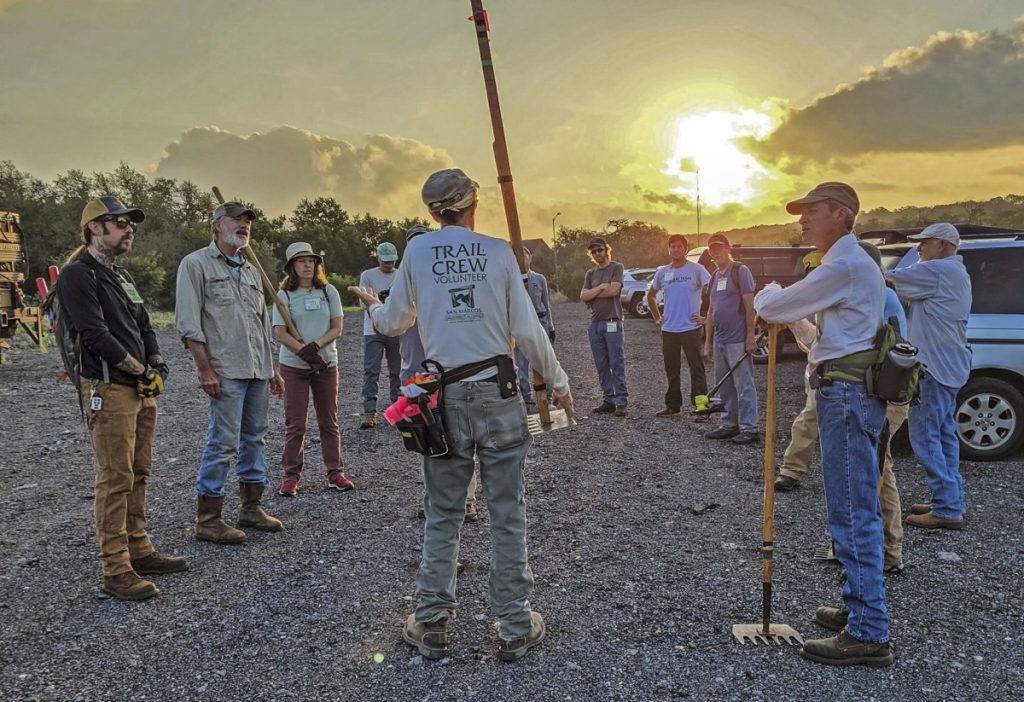 Getting ready to work in RReNA

Written by Susan Hanson, Editor of The Loop.