SMGA’s second trail crew focus is on invasives and dominant natives. What does that mean to you the trail user?  Have you noticed how some plants seem to crowd-out others? How few wildflowers there are when you expect to see them?
Led by Donna Browning and a team of volunteers worked several of the natural areas.
Many hours were spent at Ringtail Ridge natural area off Old Ranch Road 12 between Crestwood Shopping Center and  Dakota Ranch Apartments. Last Spring bastard cabbage, also known as mustard, rose to a height of four feet and crowded out many of the grasses and wildflowers that do not grow as tall. Because invasives dominate native plants are often crowded out.
A second, more ambitious attack plan was the removal of an excess of prickly pear cactus at the Ringtail natural area. Notice in the two photos the area directly behind the kiosk. Two large stands of cactus were removed by the trail crew.
Invasives at Ringtail include chinaberry, Johnson grass, King Ranch bluestem, horehound and cockleberry to name only a few.  Then ther is the native prickly pear cactus and abundance of mesquite trees.
The removal of the invasives is a long process that will take years to yield results.  The photos above highlight only a small section of the 45 acres at Ringtail Ridge.  Larger natural areas have different issues with invasives and are similarly being removed.
Prospect Park, part of the larger Purgatory Creek natural area, has been the focus of our collaboration with Bobcat Build over the past years.  (Stories about the removal of ligustrum from around the karst features can be found on this blog.) 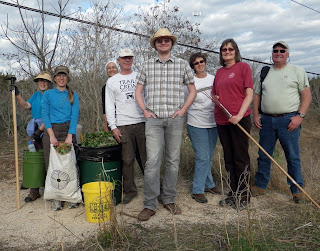 It is not just about the removal of non-native plants and the damage they do but also about the seeding and planting of native grasses and wildflowers.  During this drought period we have not see the results of our efforts but given the rains at the right time we should be rewarded in the future.  If you would like to volunteer for this crew contact [email protected]  The crew schedule is more flexible and usually works weekends. –LJ