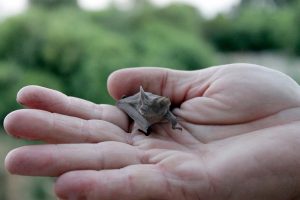 Using the monthly bird walks as a model, San Marcos’ Parks & Recreation Department has approved plans for regular bat walks in local parks and natural areas. Special permission has been granted to allow participants to remain in these spaces past normal closing hours in order to better see the bats emerge.

As the state with the most bats and the most species of bats—33 out of the 43 that occur in the U.S.—Texas has for many years been a hot spot for bat watching. This hasn’t always been the case, however. In the mid-1980s, for example, residents of Austin were alarmed to discover that Mexican freetail bats were roosting in record numbers under the redesigned Congress Avenue bridge. Indeed, newspapers at the time were running headlines such as “Bat colonies sink teeth into city” and “Mass fear in the air as bats invade Austin.” Misinformation about bats abounded, and with it came calls to eradicate the creatures.

Ironically, as perceptions and attitudes changed—thanks in great part to the work of Austin-based Bat Conservation International—the city began turning their bat “problem” into a resource and a draw for visitors. Billed as the “largest urban bat colony in the world,” the Congress Avenue Bridge now  attracts thousands of tourists—in non-pandemic years—to see the roughly 750,000 Mexican free-tailed bats take flight every night from March through October. Once the pups in this maternal colony join their mothers in the nightly hunt for insects, that number can reach 1.5 million, making the Austin emergence even greater than that of Carlsbad Caverns.

While the totals in San Marcos don’t rise to that standard, the city is nevertheless home to large numbers of Mexican free-tailed bats, which roost in all manner of crevices—under bridges and the eaves of buildings, behind large signs affixed to structures, in parking garages, in natural rock crannies, in bat houses. Each of these creatures is roughly 3.5” long and weighs 0.25–0.42 ounce, less than half the weight of a house sparrow. Slight as they are, Mexican free-tailed bats make a spectacular sight when they take to the air by the thousands, creating a living cloud that can be picked up on weather radar on summer nights.

Exactly where and when bat walks will take place in San Marcos has yet to be determined, but once the details are set, SMGA will announce them via Facebook and The Loop.