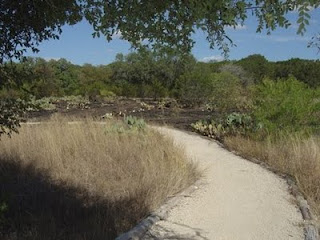 A neighbor near the entrance to Prospect Park smelled smoke in the early morning hours of Thursday, last week. When you live next to a park that has plenty of juniper and when it has been feeling like Death Valley for the last few months, the smell of smoke starts the adrenaline. There was indeed a fire that apparently started along a wooded edge in the first meadow. The picture at right was taken from the ephemeral ponds. The light morning breeze, higher humidity, and withered grasses helped keep the flames from spreading too quickly; the fire department made quick work of it.
An SMGA investigation found a likely location for the origin that included an overflowing ash tray and some books on astronomy and mathematics along with what may be the remains of a lawn chair. A small one-person tent had been there a few weeks earlier and reported to the Parks Department. Lucky this time but maybe not the next – do be careful out there. Report potential problems to the Parks and Recreation Department as soon as you observe them, 393-8400. Emergencies should go straight to 911…t.o.d.