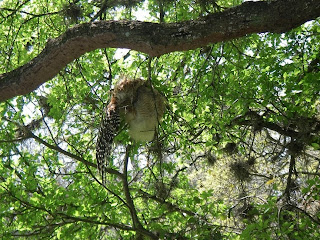 Jesse Huth, a local bird expert and friend of SMGA, spoke to his friend Sallie Dellahoussaye about our Where on the Trail article for March, and this is what they think:

You are right, it is a red-shouldered hawk. It appears the head has been torn off. This would not be considered a common occurrence. However, it is possible that the bird was attacked by another predator, such as a great-horned owl. They can and will kill many things that are in their territory. Great horned owls have chicks now and can become extra protective. It is also possible that a mammalian predator got to it while it was nesting or roosting one night. A raccoon or ringtail could have done the damage, but a great horned is a more likely suspect. One would expect a mammalian predator to eat more of the hawk.