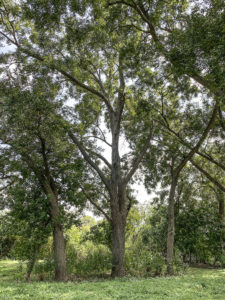 Take a walk along any of our Hill Country rivers or creeks and you will certainly encounter more than a few native pecan, Carya illinoinensis. This month you will also find the ground scattered with a bounty of nuts. A member of the Juglandaceae family, the pecan is related to both the hickory and walnut trees. Growing to heights of up to one hundred feet, pecan trees can live for over one thousand years and produce nuts for several hundred years. Take note of that longevity!

Native only to North America, the pecan tree is believed to have originated in the geographic region now known as Texas. It has since spread across the southern states. The pecan tree prefers the rich, moist soils of bottomlands, especially along the sides of streams, but once established it can withstand periods of drought. A loyal and generous Texan, this stately tree produces an abundance of nuts, which it shares with people and wildlife, as well as offering the gift of shade through the dog days of summer. 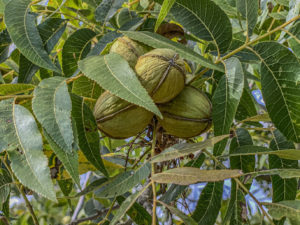 The indigenous people of this area recognized the value of the pecan as a food source, and would collect the nuts to help sustain them during the winter. Later, as the first European settlers began claiming land from the tribes, they, too, saw value in the pecan tree for both food and wood. Stands of pecan trees eventually were cleared for other agricultural uses across Texas. By 1900 large stands of native pecan trees, which had flourished since before the advent of humans in the area, were nearly eliminated.

My love for trees extends well beyond their aesthetic benefits to what they may offer medicinally. Although my expertise is with native European trees, I have recently begun uncovering the rich resources we have right here in Texas. There are certainly a number of reasons we should consider what the pecan tree has to offer. The nut’s shells have also been tested for bioactive compounds and have been found to have considerable antioxidant properties. Current research is exploring the use of teas prepared with pecan shells to treat liver damage in rat models, although no such human research has been conducted. Regarding other parts of the tree, the Kiowa tribe of the Great Plains used decoctions of the tree bark to treat tuberculosis. And the Comanche Nation used a poultice of pulverized pecan tree leaves as a topical treatment for ringworm-infected skin.

A historical record from the mid-1500s by the Spanish explorer Álvar Núñez Cabeza de Vaca revealed that indigenous peoples in South Texas would gather pecans in autumn, grind them and soak them in water to make a milky beverage to sustain them throughout the winter. This liquid also formed the base of a fermented beverage called pow chicora, also made from hickory nuts. The ground pecan meal was used to thicken stews, and pecans were often roasted for sustenance on long journeys.

Beyond beauty and medical potential, traditional uses for pecan wood range from furniture, cabinetry, and flooring to tool handles, ladder rungs and dowels. It is a favorite for sporting goods because it is very hard but only moderately heavy, tough yet resilient.   Today pecan is frequently used in residential furniture, cabinetry and architectural applications

I hope these insights have instilled a newfound respect in you for this versatile and giving native Texas tree.

Written by Lauren Hubele, a member of SMGA’s Outreach Committee. She is an author and educator whose practice provides a framework for resolving chronic and acute conditions using gemmotherapy, homeopathy, and a plant-based diet.

** Note: “Before he died in 1906, former governor James Stephen Hogg requested that a pecan tree mark his grave. As a result, the native tree rose in popularity. It was declared the state tree in 1919. Widespread in the wild and popular as a yard tree, the pecan is native to Texas and produces the state’s only commercially grown nut. Millions of pounds of the soft-shelled, sweet-meat nuts are harvested annually for use in pies, candy, and other treats.”—The Bullock Museum