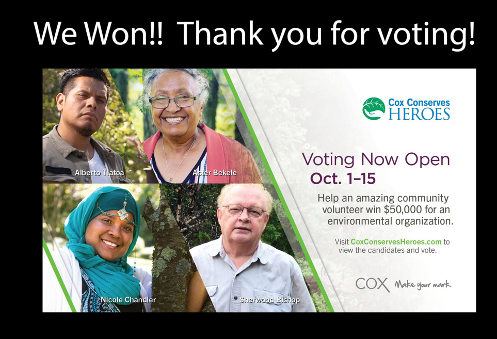 Whether it was SMGA members asking everyone they know to vote, or the impressive materials submitted for the award, or simply good karma, SMGA defeated three worthy competitors—all from much larger cities—to win this year’s Cox Conserves Heroes Award. The prize comes with $50,000, which SMGA will add to its regional award of $10,000. The following account, written by Celeste Hollister, appeared in the San Marcos Record. 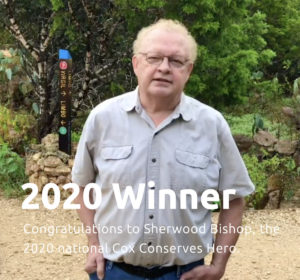 Last Friday, Sherwood Bishop and the San Marcos Greenbelt Alliance received the 2020 Cox Conserves Heroes national grand prize of $50,000 as well as an additional $10,000 in the regional prize.

Cox Conserves Heroes is an awards program created by Cox Enterprises and The Trust for Public Land (TPL). The program honors environmental volunteers who create, preserve and enhance shared outdoor spaces in their local communities.

The goal of the program is to inspire and encourage individuals in their efforts to make a positive impact on the planet through volunteerism.

In response, Bishop, who serves as president of the San Marcos Greenbelt Alliance said, “It’s an amazing honor to win a national award like this. On the other hand, it’s a little embarrassing to be designated as a hero considering all of the firefighters, nurses, wounded warriors, schoolteachers and others around. However, I’d be willing to put up with an awful lot of embarrassment in order to raise money for a wonderful organization like the San Marcos Greenbelt Alliance.”

“When I first learned that I had been nominated, I felt very honored, but I didn’t think there was a serious possibility that I would win, even at the regional level,” Bishop said. “In all the years of this award, no Texan has ever won before.”

In Phase Two, each regional winner then competed at the national level for the title of the National Cox Conserves Hero. Nominees shared a video talking about their nonprofits of choice and explaining why that organization needed the funds from the Cox Conserves Prize. The public then viewed and voted on the videos for which they felt were most deserving of the $50,000 grand prize. A total of 4,506 votes were cast. Bishop and the San Marcos Greenbelt Alliance received 1,495 votes in total.

“We got the most votes, but as you can see, every vote counted,” Bishop said. “We’ll have a lot of people to thank. This is really an award for SMGA. The amount that they have accomplished during the past 22 years is incredible. And of course, SMGA is an alliance. We work in partnership with the city, the county, other nonprofits, particularly the San Marcos River Foundation, and many others in our community.”

The Cox Conserves Heroes prize will go a long way in helping SMGA realize some of its overarching goals, including the Emerald Crown Trail project, which will eventually link the  San Marcos greenbelt with the Kyle, Buda and Violet Crown Trail, which leads all the way to Ladybird Lake in downtown Austin. This endeavor, a collaboration between SMGA and the Great Springs Project, will develop a string of trails and parks between Austin and San Antonio.

“$60,000 will have an amazing impact on SMGA,” Bishop said. “We’ve been living beyond our means for the past few years because the need for building and maintaining new trails has been growing so fast. Our work has expanded well beyond the limits of San Marcos. We’re almost finished building a large trail bridge over Purgatory Creek that we are only able to build because the Leadership San Marcos class of 2020 raised the money to pay for the materials.”

Bishop conveyed his passion for the natural areas and greenspaces of San Marcos to the voting public, a vision that has been honed into focus this year as more people embraced nature in the face of quarantine and pandemic. “Because of the pandemic this year, the river parks in San Marcos and the parks on the University campus were closed for an extended period of time,” Bishop said. “As a result, many people visited our preserves and natural areas for the first time, where they could remove their masks and breathe the air without fear.

“I see an amazing variety of people on the trails: babies carried in their mother’s arms, toddlers who sometimes look like they’re experiencing the world outside of their homes for the first time, and people of every other age. Sometimes I see very elderly people using walkers on the trails and I think being out there helps make them feel younger. One kind of people that I rarely see on the trails are strangers. People smile, wave, and say hello to others. Sharing that space seems to make everyone feel that we belong to the same community, that we’re all neighbors.”

Historically, fundraising for the SMGA has presented a challenge because, according to Bishop, most people who volunteer want to work outdoors on the trails rather than indoors writing and applying for grants. The Cox Conserves Heroes prize will allow Bishop and fellow SMGA volunteers to focus on the hands-on work that interests them the most.

“We’re looking for some land, preferably near one of the green spaces, where we can build a permanent home,” Bishop said. “We might even have a shared home there with the San Marcos River Foundation.”

Bishop said that one thing that distinguishes San Marcos from other cities is the way in which the greenspace has been developed.

“One unique aspect of the trail system that is being developed through our city is the extent to which it is largely separated from the street network,” Bishop explained. “Most of the trails run along the sides of rivers or creeks and pass below the intersections of major streets. Pedestrians and bicyclists will be able to easily access streets from their homes or when they’re nearing their destinations, but along the way they can mostly move without interacting with motor vehicles.”

This designation may have contributed to the national recognition San Marcos and the SMGA have gained with the Cox Conserves Heroes prize.