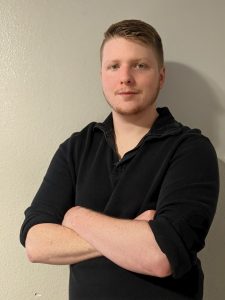 I am a senior at Texas State University majoring in Anthropology and Mechanical Engineering and an intern with SMGA.

When I first realized I needed to take on an internship to finish my degree, I was frustrated because I did not want to cut out 12 hours a week to sit in front of a computer or be a glorified coffee runner. After perusing the internship catalogue, I saw that many of them were in fact computer jockey coffee related. But there were others, too; some anthropology majors interned with the FBI, others with the Meadows Center or the Texas Historical Commission, and a few more largely involved active, hands-on, and often outdoor experiences. I remembered that I had always intended to check out SMGA and see about volunteering, so I reached out to the internship coordinator and asked if I could pursue an internship with SMGA, which he promptly approved.

Since then, I have been getting up earlier than I thought possible and drinking more coffee than I thought survivable—and loving it. I get to hike at dawn and be involved in something meaningful, and work with inspiring people who value the community with the highest regard. I have learned a lot, too, about trail building, but also, and somewhat surprisingly, about the landscape of the city. Not the physical landscape but rather the landscape of the people and the institutions; while they at times have conflicting motivations or interests, all simply want the best for their community. I am tasked with creating a sort of “interpretive project,” essentially a display of sorts that could either be an informal panel or an entire guided tour focused on something of historical importance to the natural areas. This is what ties my anthropology focus into the internship. Todd and I have come up with several ideas, but progress has been somewhat slow as getting all the right people who would need to be involved in any given project together and talking has been the biggest challenge thus far. But I believe that we can get something done, and even if it ends up being small, it may hopefully lay the foundation for future SMGA work in this area.

The important work that the SMGA does to maintain and grow our natural areas is never-ending, and although my internship ends in early August I plan to stick around and keep helping as much as I can. My hope is that my experience, once listed in the university internship catalog, will grab the interest of future students who may want to join the SMGA and open up the possibility to continue growing the alliance.