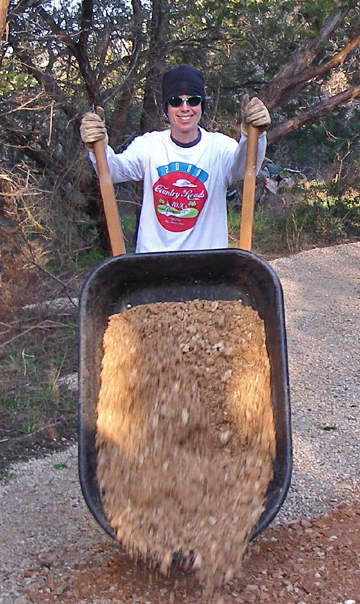 Sheila, you were a founder and have been an active volunteer/member of SMGA for 20 years. What do you think is the most exciting change you’ve seen in the organization?
I love the way the Trail Crew has grown from just a few regulars. We now consistently get a dozen or more folks show up on Thursday mornings. This is great because more bodies means the ability to do more maintenance tasks and faster completion of new construction projects. The project I’m most excited about is the Emerald Crown Trail. This is also a result of growth in the organization; we have enough folks with the skill, the time and the passion to pursue it. I know we’re looking at a long timeline but I can’t wait for the day I can ride my bike all the way to South Austin on a route that is primarily trail.

What motivates you to volunteer and give back after all these years?
Honestly, it all started out of a completely selfish desire to have more trails which I could access without getting in a car. But turns out I really enjoy the work and the camaraderie of the crew. Some days 7am feels pretty early and it’s hard to get out the door but I never regret starting the day in nature.

Speaking of volunteering you just won an award from Texas State. Can you tell me about that?
The Texas State Staff Council presents its Earl L. Moseley, Jr. Community Service Award to a full-time staff member who exemplifies outstanding community involvement.

Finally, you have done the Tour Divide (a 2700-mile bike ride from Canada to Mexico), the Arizona Trail Race ( a 750-mile bike race including a 21-mile hike carrying your bike! ) and too many other endurance races to list here. Can you choose a particularly memorable race or event? 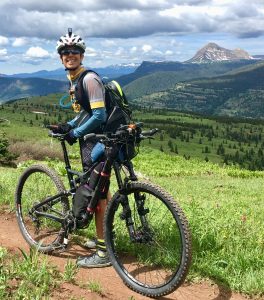 Every race has been challenging and memorable in some unique way; it’s terribly hard to choose. But the one that’s been on my mind lately is the Arizona Trail Race, which I completed in 2013. The route is 750 miles stretching from Mexico to the Utah border. And yes, because of restrictions on bike travel in the national park, one must break down the bike and carry it through the Grand Canyon. At the time I only had one other multi-day race under my belt so there was a huge amount of preparation and a lot of nerves going into it. One certainly doesn’t expect traveling that far by bike to be easy, but until you’re out there you really have no idea what you’re getting into. Every day brings some new and often unexpected challenge, whether a random thing like not reaching that little store in the middle of nowhere before they close or the result of some critical mistake, like missing a turn and not realizing it until you’re halfway down the mountain. There was one point during the race when things seemed to be going badly and I had made up my mind to quit in the next town. I arrived in the wee hours and the office to the one motel was still closed so I got some food, a little rest and checked in with home. And that was enough to get my head back in the game and thinking about how to make things work rather than the fact they weren’t. Whatever the situation, you just have to figure out a way to deal with it and keep moving forward. Kind of a good metaphor for life I suppose.

Next up for Sheila is the Colorado Trail Race on July 28th. This is a mostly single track route from Durango to Denver.  Good luck Sheila!  You rock!  –DP