Stephen Ramirez started leading monthly bird walks in San Marcos shortly after graduating from Texas State with a degree in geography. His love and interest in birding was evident from that first event at Aquarena Springs when the old amusement park with its empty buildings still dotted the shores of Spring Lake.

Colton Robbins, whose degree is in wildlife management, joined the monthly walks several years later and has been assisting with locating, identifying and documenting the variety of birds we’ve seen over the years. Together with Stephen, he’s shared his knowledge of field marks, behaviors, song, plumage and a myriad other details that make for a good birder.

When you notice a kettle of vultures circling overhead what do you see?  Look closer.  We’ve learned from these monthly walks, flying higher, but also in a circle is often a hawk or other accipiter.  This month it was three Mississippi kites. Another time it was the zone-tailed hawk, a rare sighting in this area. 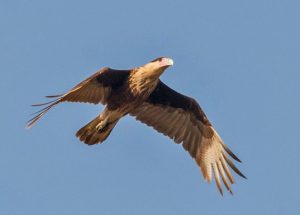 The sunrise walks — because that’s when the birds are most active — usually last about an hour-and-a-half.  Stephen brings a spotting scope which gives people a chance to view birds that are perched or preening. Both Colton and Stephen have excellent hearing and are able to locate elusive birds by their calls. At the end of the walk, a list of all the birds spotted is uploated to eBird, a program from Cornell Labs. Over the years the list has become a Citizen Science database of local bird sightings, both common and rare.

While the walks are mostly held within the city limits of San Marcos, the group has ventured to Five Mile Dam, as well a private property or two at the invitation of the landowner, federal land owned by the Fish & Wildlife Service and properties owned or managed by the San Marcos River Foundation or land trusts. Primarily the walks are held along the San Marcos River, Spring Lake or in one of the six natural areas owned by the City. If you are interested in participating , contact [email protected] and ask to be notified of the next walk.