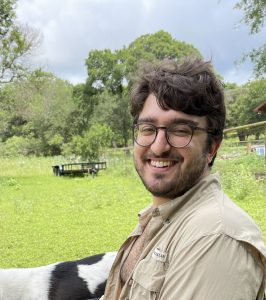 A self-proclaimed “San Marcos local,” Daniel was born in Germany, but did most of his growing up here. He joined the San Marcos Greenbelt Alliance during the first summer of COVID because, as he puts it, he “was looking for anything to do besides sit on the couch eating snacks.” Since joining, he has come to love being a part of the organization. He recently started a Saturday crew (it generally meets at 8 a.m. every Saturday if you want to join) and is excited to continue to grow that group.

On a more personal note, Daniel says he has found his work with SMGA to be an excellent means of dealing with anxiety and depression. As he puts it, “Taking a moment out of my week to go connect with nature, having no obligations beside lugging big rocks or sawing through limbs, and contributing to something that is bigger than myself has been incredibly beneficial to my overall wellbeing. I recommend anyone and everyone give it a try.”

I value the natural areas for a few reasons. Selfishly, I like having a place where I can go to clear my head, be alone for a while, disconnect from modern life, and walk my dog (Owen). However, my involvement with building the trails has really changed my perspective on the value of these natural areas. I think they are invaluable to the health, both physically and mentally, of our community. They’re also some of the few areas that manage to bridge the gap between local residents and college students, which I think is becoming more and more important as the city of San Marcos continues to grow. I think natural spaces are important in general because we have long had a relationship with nature characterized by conquest, consumption, and exploitation rather than symbiosis. I think the more we can do to make areas of relatively or completely undisturbed nature appealing to a community, the more people will realize their importance not just environmentally, although that is a huge part of it, but also their importance for staying connected with our humanity. I think nature lets us see life for the beautiful, complex, and sometimes cruel thing that it is. It’s important to stay aware of that in some way.

What is your favorite trail?

It’s hard to pick a definitive favorite, but I really love The Berms within Ringtail Ridge. It’s a rather small trail, but I had a cool experience walking around there one morning—so much so that it’s stuck out in my memory ever since. One of my first experiences with Ringtail Ridge was about a year ago after I had just gotten started with SMGA. It was foggy and dreary, and I was feeling kinda down. I was walking around Ringtail and, at the time, was completely unaware I had gotten onto The Berms. When I’m new to an area I like to just kind of get lost and then try to figure out how to get out, so I didn’t learn where I was until afterward. What I found incredible about the area is that despite its small size, it felt amazingly diverse. Every 40-50 yards it felt like I was in a new area entirely. The Berms trail especially feels this way because you have the blood pits contrasted by an area of mostly dead trees that have lost their fight against the greenbriar. But between the two areas you have this clearing that feels unlike any other clearing in the area. Something about seeing all those dying trees nested within an area that was otherwise thriving stood out to me. It showed me how much of a difference we are making in the areas we’re able to get to, and that what we do is important.

Simple as it may be, I just really love bringing Owen out there and maybe hiking a trail I don’t know so well. My favorite thing to see, though, is families using the trails I helped build and maintain. I feel a sense of accomplishment every time and am always happy to have played some small part in facilitating a family outing.

What recommendations would you give new users of the trails?

Don’t listen to music. Maybe leave your phone in the car or only bring it for emergencies. Stop to breathe occasionally and just take in where you are. Regardless of how I’m feeling when I start a hike, once I stop and make myself be present in the moment, it really makes me feel lighter and more grateful, as corny as that may sound. Not everybody has access to something as beautiful as our trails.