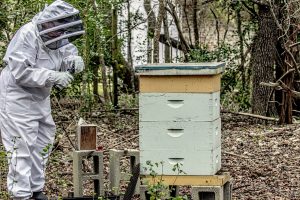 “I’ve signed us up for a beekeeping class,” my husband announced one day a little more than 10 years ago. You can imagine my surprise.

“Do what?” I asked, not knowing what else to say. Yes, he replied, he had enrolled us in a class that would be starting soon at the San Marcos Public Library. Hadn’t I once mentioned that it would be “cool” to keep bees? I had, I admitted, but that was sort of in the same vein as “Wouldn’t it be cool to raise llamas?” or “Wouldn’t it be cool to live on a farm in Upstate New York and sell goat cheese by the side of the road?”

We went to bee class nonetheless.

Since that time, we’ve had only three hives: one that seemed to be thriving, only to have the entire colony along with their honey disappear virtually overnight; another that turned out to be uncontrollably “hot” and had to be destroyed by the fellow beekeeper we gave it to; and the third, which we’ve managed to keep alive for several years, knock wood.

These bees have probably lived in spite of us and not because of anything that we learned in class. We don’t “work them” the way some beekeepers do—that is, by regularly going out to check for insect infestations and the like. Typically, the extent of our involvement is to stick our heads around the back of the shed to see if anyone’s coming or going from the hive. If the bees are on the move, I assume they’re doing ok. Granted, I do check on them every now and then, mainly to clean out the hive beetle trap underneath it and to take off the outer cover, making sure no wax moths have made it in. Otherwise, the bees are on their own.

You might note that I’ve gone from using the plural “we” to the singular “I.” My initial reluctance notwithstanding, these are now my bees. It turns out that my husband is highly allergic; two EpiPen and EMS calls later, he doesn’t go anywhere near the beehives anymore. Fortunately, since I’ve never collected the honey, caring for our single colony works fine as a one-person job.

“Why keep them?” some people wonder when they learn we’ve chosen not to harvest what the bees produce. Fair question, I suppose. Besides the fact that they’re fascinating creatures to watch, I simply like knowing that we’re doing our bit—albeit a very small bit—to keep the bees around.

Segue to the topic at hand: Fall pollinators. Spring in Texas may get all the hype, what with the swaths of bluebonnets and Indian paintbrush and firewheels along the roads. But my preference has always been for fall. The colors may be more subtle, running more toward white and gold, but the effect can be stunning nonetheless. 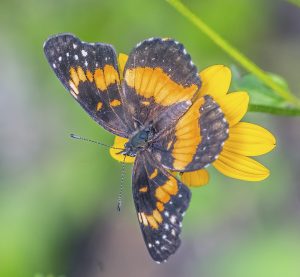 Moreover, for pollinators, these fall flowers are literally a matter of life and death. Without them, they can’t do whatever it is they do this time of year—migrate, hibernate, or, in the case of my bees, build up their stores of food for the colder months ahead.

What about host plants? These are just as important, both for caterpillars and for any species that overwinter here. Williamson County Master Gardeners offer this partial list for Central Texas:

A few noticeable omissions from the list are these:

When I look around our property, I’m happy to find a number of these host plants. But given how long this list is, it looks like we would still do well to add a few. Fortunately, fall is the perfect time to do this.