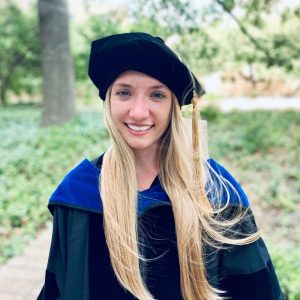 Christina Lopez, receiving her Doctorate in Geography from Texas State in 2021

SMGA was approached a few years ago by Texas State University researchers wanting to learn more about how membership in an environmental stewardship organization like SMGA translates to changes in knowledge and behavior of the members.* In the summer of 2019, SMGA members were invited to participate in an online survey, which 125 of us did. A handful of in-person interviews were also conducted afterwards as part of the study. Christina Lopez and Russell Weaver, investigators from the Department of Geography, are in the process of publishing results of this and similar studies, including an article published last year in Electronic
Green Journal: “Understanding impacts of environmental stewardship programs through community geography: pro-environment behaviors cultivated and reinforced.”

For privacy purposes, SMGA was referred to in the article as “Community Partner 2 (CP2).” Those who have lived in San Marcos for a while can probably guess who “Community Partner 1” is: “The organization was established in 1991 and since has trained over 10,000 stewards to monitor water quality.”  The combined survey results revealed that members reported increased water awareness and environmental activism after participation in their environmental stewardship group. For example, survey respondents were more likely to tell friends and family about environmental issues, participate in local government meetings, or reduce household water consumption, as a result of environmental stewardship activities in their respective organizations.

Overall, the study showed there is a tendency to expand one’s knowledge of environmental issues, as well as one’s local actions – what Lopez and Weaver call “a virtuous circle of pro-environmental behavior.” One theme of the personal interviews (all conducted with SMGA members) was that stewards may change their perspectives of the natural environment, but also their self-perceptions, as they grow in knowledge and confidence through their stewardship work.

Lopez and Weaver pointed out that there is more of a social component in how SMGA operates relative to the other organization, CP1: “These social connections can create or reinforce social norms around environmentalism . . . jumpstarting or turbocharging the feedback loop we described earlier.” Whether we are turbocharged by our social connections, or by the excellent coffee at Wake the Dead is unclear – maybe it is a synergy – but either way this study has documented some of the benefits of participating in SMGA as a steward of the city’s natural areas.

* Christina Lopez’s proposal was one of the two awarded the inaugural SMGA Fellowships.