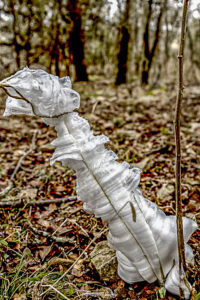 If you’ve ever wondered how frostweed (Verbesina virginica) got its name, the recent ice and snow storm should have cleared that up. As the Lady Bird Johnson Wildflower Center website explains, “When winter weather brings ice, the stems exude water that freezes into fascinating shapes, hence its common name Frostweed.”

Indeed, one day it looks like any other dead plant in the woods, and the next it’s an art piece, a white assemblage of swirls and strands and folds. The Wildflower Center notes that these shapes have gone by many names: “ice ribbons, ice flowers, ice fringes, ice fingers, ice filaments, ice leaves, frost flowers, frost ribbons, frost freaks, frost beards, frost castles.”

Before undergoing this magical transformation, frostweed—aka white crownbeard, iceplant, iceweed, Virginia crownbeard, Indian tobacco, richweed—spends most of its life as a hardy perennial or biennial growing in thick colonies in shade or part shade. It earned the name “tobacco weed” because of its large, rough leaves that were used as a tobacco substitute by native peoples. The leaves were also employed as a diuretic and laxative, or as a tea to treat arthritis, kidney stones, and eye problems.

Even in the years when frostweed doesn’t undergo its icy metamorphosis, the plant puts on a beautiful show in the fall. Growing from three to six feet tall, frostweed produces large white cauliflower-like clusters of flowers from August through November. This timing makes frostweed particularly important for pollinators, including monarchs, pipevine butterflies, and purple hairstreaks, as well as honeybees. Later, when these flowers dry and turn brown, birds will be drawn to the seeds. The fact that frostweed is also unpalatable to deer makes it an especially desirable plant in the native landscape. 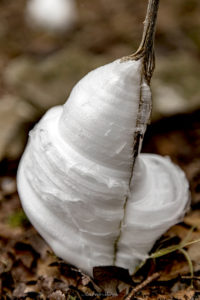 That said, you’re not likely to find frostweed at the typical nursery. If you’re lucky enough to have it in your yard, however, you can propagate it from seed or by root division during dormancy. Seeds are also available from Native American Seed Company.

In the home landscape, frostweed is best used as a background plant. Though it’s tolerant of dry, rocky soil, it will be more robust with a little moisture and richer soil. Just remember that better conditions will result in a taller plant, claiming more space than you may want to give it.

If you aren’t interested in propagating frostweed at home, remember that you can help SMGA by collecting seeds from the dry seedheads and saving them—in a paper bag or envelope—for Team Flora to use in the natural areas.

Written by Susan Hanson, SMGA board member and editor of The Loop.