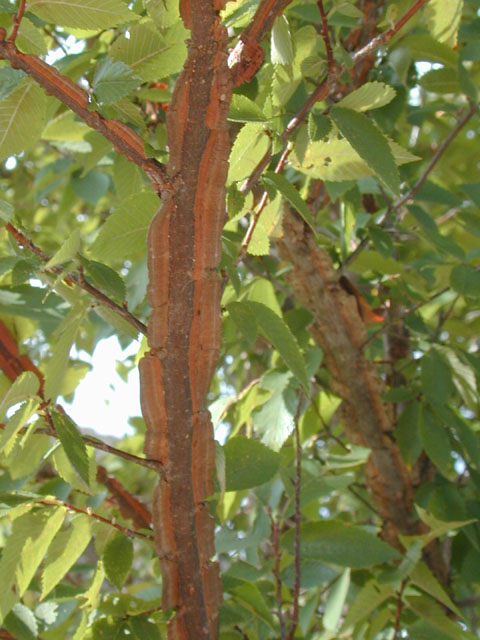 Most often spotted near a water source, this Texas native, the winged elm, is certainly worth your attention. The Ulma alata grows 30-40 ft. high, with spreading branches that form a round-topped, oblong head, creating the canopy or second canopy in a natural forest.

What I am sure you are curious about are those unusual corky ridges that occur on the branches in one plane, lending their name to the winged elm. This is not to be confused with the more common cedar elm, Ulmus crassifolia, which produces similar wings.  You can differentiate the two by the larger leaves of the winged elm and the flowers, which drop before the leaves unfold, and the samsara fruit that appears in early spring.  In fact, it is most often one of the first trees in our area to flower.  Given the unusual February weather, they may still be visible. The corky ridges of the winged elm appear after a few years of age, while they appear on the cedar elm only in the early years.

Always of great interest to me is the type of soil a tree can tolerate, and the winged elm is incredibly tolerant.  That it grows with ease in clay, loam, sand, both acidic and alkaline soils, and in flooded and well-drained ground provides me with excellent clues about what it may offer a body medicinally. What winged Eem does require, however, is sun; it is the least shade tolerant of all elms.

Indigenous tribes of Texas and the Southeast used the fibrous inner bark of Ulma alata for rope and baskets, as well as for tool handles. Europeans who later settled on the native lands and began farming used this technique of rope making to fasten covers for cotton bales.

Medicinally, the inner bark as been used for centuries for digestive symptoms, including diarrhea, and to ease childbirth. While I do not have experience with this Texas native, I am quite familiar with the European elm, Ulmus Campestris. When the buds of this elm, which contain a concentration of meristem cells, are made into a Gemmotherapy extract, it is a tonic for kidneys that influences the draining of skin. Used within a series of Gemmotherapy protocols it very successfully supports the body’s ability to heal a variety of skin inflammations.

This European elm tree has very similar growth patterns as our winged elm.  Most often found along large rivers such as the Rhine, the Elbe, and the Danube, it thrives in damp, periodically flooded soils and yet can tolerate moderately dry or clay-like acidic soils as well.

Perhaps with these insights, you will be on the lookout for a winged elm as you head out on the trails in the fine spring weather. Whether you consider the winged elm for its medicinal potential or as a congenial addition to your backyard native tree collection, it certainly deserves your attention.

Written by Lauren Hubele, a member of SMGA’s Outreach Committee.