In spite of its unassuming name, pigeonberry—Rivina humilis, the latter term meaning “lowly”—is one of my favorite plants. If you look carefully, you can find it in Schulle Canyon and other natural areas, sporting white flowers and red berries at the same time. I say you must look carefully simply because this is usually a small plant; though I’ve come across specimens that are three-feet tall, most reach only a foot or so.

I knew nothing of pigeonberry until, much to my dismay, an unidentified fungus killed a number of our trees some years ago and we had to have 22 removed. Upsetting as that was, taking out those trees allowed much-needed sun into our woods, resulting in the appearance of understory plants we didn’t know we had. This included pigeonberry.

One reason I love this plant so much is that while it will grow in part sun, it will thrive in shade, something we have in excess. It will also take a great deal of abuse, including drought, heat, and poor, rocky soil—also things we have in abundance. That said, it nonetheless loves moist shady spots. In short, it’s happy to live wherever you put it.

As if these attributes weren’t enough, pigeonberry is a perennial with long-lasting blooms, great for small pollinators, and berries that remain only until the birds find them. Deer, however, tend to leave it alone; in the same family as pokeweed, pigeonberry is poisonous, making it unpalatable to all but the most desperate wildlife. Further, the berries can be used to create dyes, ink, and even rouge, giving the plant one of its common names, rougeplant. Like pokeweed, the entire pigeonberry plant probably has medicinal uses, especially in treating wounds, though only expert herbalists should test this theory.

As the Native American Seed catalogue says of pigeonberry, “It’s one of those plants that has to be experienced to be believed.” And yes, pigeonberry seeds are available through this company, though the plant is also readily available in many nurseries. You might also check with the San Marcos Discovery Center when it has its next online native plant sale in October. 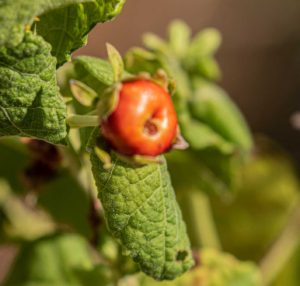 Something else you’ll see in abundance on the trails this time of year is Turk’s cap, which is currently going to seed. Where red fez-like blooms were once in abundance, you’ll now find small red fruits, which are edible for humans as well as wildlife.

Writing in A Practical Guide to Edible & Useful Plants, Delena Norris-Tull explains, “You can eat the flowers, fruit, and young leaves of Turk’s cap either raw or cooked . . . . The leaves are a bit too fuzzy and tough to yield a very good salad or potherb alone, so you may want to mix them with other greens. Have you ever tasted hibiscus tea? You may like a tea of Turk’s cap flowers.” Adding that these blooms can be dried and used year ‘round, Norris-Tull continues, “The flavor of the raw fruit is reminiscent of that of a watermelon or apple.” Because the seeds are so large, she notes, the fruit is used best when cooked down to make a jelly or syrup.

A word of caution: If you really want to collect the ripe Turk’s cap fruit, you’ll have to beat the birds.

Written by Susan Hanson, a member of the SMGA board and chair of the Outreach Committee.