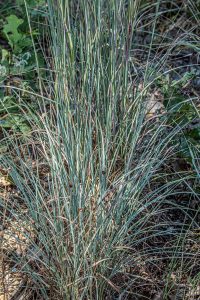 Grasses are hard—not literally, of course, but in a taxonomic sense. I can’t tell you how many times I’ve turned to a fellow hiker and, with great hope in that person’s botanical abilities, asked, “Do you know what this is?” Inevitably, I’m let down. Even my most knowledgeable Master Naturalist friends have trouble identifying many of the more than 700 species of grass found in Texas.

I can summarize my own expertise in one sentence: I own two books about Texas grasses—Common Texas Grasses and Grasses of the Texas Hill Country, the second of which I find more user friendly—and I almost studied grasses long ago in a Master Naturalist class. My husband and I had been participants in the program the year it began in Hays County, but the class was interrupted by a flood and, not being told when it was going to resume, we never went back. Grasses had been the next topic on the agenda. So it goes. 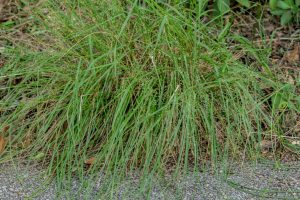 Frank W. Gould, author of Common Texas Grasses, writes, “Many people who would like to identify grasses are intimidated by the seeming complexity of the spikelet parts, their smallness, and the unfamiliar terms used to refer to them.” Well, yeah. These novices, he says, tend to look at just two things to help the ID a grass—the inflorescence (the flower) and the spikelet (the thingy that holds the flower). Consequently, when I ask a friend to ID a grass I’ve seen on the trail, that friend may well respond with, “Wintertime makes plant ID tough. There’s no inflorescence or seed heads.”

In contrast, when there are these features, even I can identify a few of our most common native grasses—namely sideoats grama, windmill grass, and bushy bluestem, thanks to their unusual flowers or seeds—along with a couple of less desirable species, such as Johnson grass and, dare I say it, Bermuda grass. I can ID St. Augustine, too, but I’m not sure that counts.

Like a great many Texans, I grew up with a St. Augustine lawn and attempted to replicate that lawn when I had my own house. I ultimately failed. Granted, it seemed to thrive for a while—with ample water, of course—but one particularly cold winter did it in, for the most part. I let the remnant grow until—well, until it didn’t anymore. A survival-of-the-fittest gardener, I gradually replaced all of our grass lawn with planting beds, pathways, and natural areas. What “lawn” we now have is a small patch of horseherb, which I run over with our push mower a couple of times a year. 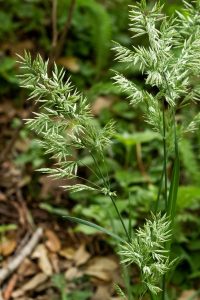 We do still have some grass, though I can’t tell you what much of it is. There’s that bad Bermuda out near the street, and the nice clump of plains lovegrass, that folks in a plant Facebook group ID’d for me. There’s also cedar sedge, which, of course, isn’t really a grass at all. Lawn professionals consider it a weed, but in my book it’s desirable; indeed, it’s described as an “accent plant for shady areas” by the Lady Bird Johnson Wildflower Center. I prefer that definition.

The grasses that I buy these days, either as plants from Barton Spring Nursery in Austin or as seed from Native American Seed in Junction, are almost always destined for a planting bed and not the lawn. One that I especially like, in part because it thrives in the shade but also because of the showy seedheads it produces, is Texas bluegrass. Others I’ve purchased or been given by friends are bushy bluestem, pine muhly (native to far West Texas), and little bluestem, all of which make fine accent plants in the garden.

So why focus on perennial grasses when they’re dormant? On a practical note, now is a great time to put grass plants in the ground. But on a deeper level, I’m thinking about that pronouncement by Western writer Wallace Stegner: To appreciate the desert landscape, he said, “You have to get over the color green; you have to quit associating beauty with gardens and lawns.” Even dormant grasses maintain a fundamental beauty. If you don’t believe it, take a walk in one of the Natural Areas sometime soon.*

* Another great place to see native grasses is on the Tobin Land Bridge in Phil Harberger Park in San Antonio, as illustrated in the following photos by SMGA member Sarah Carlisle. 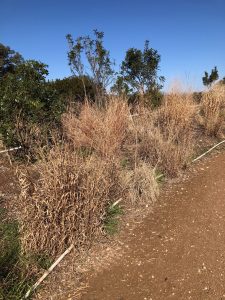 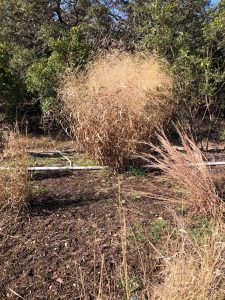