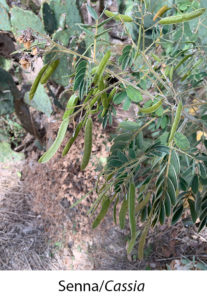 Unless you live in a part of the state where a cold snap can produce a dramatic, albeit short, burst of yellows and reds, this time of year can seem colorless indeed. Granted, there are some obvious exceptions. Though past its prime, purple fruit still clings to the American beautyberry, one of our best understory shrubs. Berries are beginning to ripen on the evergreen sumac, a most reliable fall bloomer. And other plants, such as Lindheimer’s senna (Cassia lindheimeriana), are just now setting seed, which can be collected as soon as it’s dry.

Whether in the home garden or on the trails, this is a good time of year to begin thinking about something besides color: texture and form. That means looking more closely at those plants that remain in the landscape year ‘round, often overshadowed by more showy members of the ecosystem.

One of these is twistleaf or Texas yucca. Granted, this plant can produce wonderfully showy white blooms in the spring, but when it’s growing in the shade of our natural areas, it tends to be far less flashy, remaining relatively small and unpretentious.

Although 16 species of yucca are native to Texas, only four are specific to Central Texas: Buckley yucca (Y. constricta), Arkansas yucca (Y. arkansana), Spanish dagger (Y. treculeana), and twistleaf yucca (Yucca rupicola). As a clue to the latter’s growing habit, just remember that in Latin, rupicola means “cliff-dweller.” Undeniably hardy, twistleaf yucca can grow in some of the thinnest soils of Central Texas, as well in a well-tended garden. 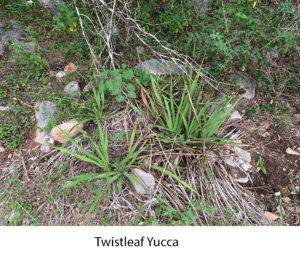 Referring to it as “the kinder, gentler yucca,” the website of the Native Plant Society of Texas notes, “Twist-leaf yucca is a versatile landscape plant because it will grow in full sun or in the understory shade of large trees. . . . The low-growing heads of twisty leaves have no visible stems. Leaves are from 8-24 inches long and less than two inches wide. They narrow toward the base and, on the other end, taper to a stout, sharp spine. For many people this ‘soft’ yucca is a less-threatening landscape plant than the typical stiff-leafed varieties which are hazardous to brush against.”

The fruit, flowers, and stems of twistleaf yucca are edible, but the roots are not. According to Plants for a Future, “The roots contain saponins. Whilst saponins are quite toxic to people, they are poorly absorbed by the body and so tend to pass straight through. They are also destroyed by prolonged heat, such as slow baking in an oven. Saponins are found in many common foods such as beans. Saponins are much more toxic to some creatures, such as fish, and hunting tribes have traditionally put large quantities of them in streams, lakes etc. in order to stupefy or kill the fish.”

Like those of other yuccas, the leaves of the twistleaf have practical uses as well. “A fibre obtained from the leaves is used for making ropes, baskets and mats,” Plants for a Future explains. The plant is also the larval host for Kendalls yucca skipper, Megathymus yuccae.

Because it’s evergreen, twistleaf yucca is a plant you can enjoy regardless of the season. Make a point to look for it the next time you’re out on the trail. 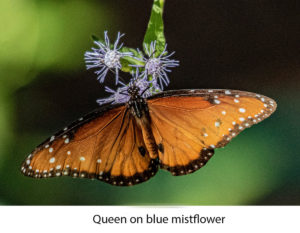 As the autumn temperatures rise and fall, rise and fall, you may continue to see butterflies on the last of the flowering plants, such as blue mistflower/blue boneset (Conoclinium coelestinum), white mistflower/shrubby boneset (Eupatorium havanense), frostweed (Verbesina virginica L.), and various fall-blooming sunflowers. What do these creatures do when the temperatures plunge? According to Alamo Area Master Naturalist Chapter newsletter, “During Winter, the season of rest, most butterflies retire to the refuge of trees and other natural shelters and remain in pupa/chrysalis throughout those months when plants are not available to provide nectar or food for the voracious needs of the growing larva/caterpillar.”

See “Moments of Nature” for more photos of some of our late-season butterflies.

​Written by Susan Hanson, a member of the SMGA Board and chair of the Outreach Committte.