I had always thought water was enough. Not so.

Granted, the day was hot, but we’d been walking mostly in the shade. And we’d been drinking water. Plenty of water. But on our way back to the trailhead—all uphill in the sun, I should add—my buddy began feeling faint. I thought everything would be cool when we finally reached a bench in the shade. But it wasn’t.

Looking over at my friend, I was alarmed to see that they were pretty much out of it, as in making unintelligible noises and bobbing their head in a way that didn’t make sense. This was definitely bad.

So I immediately punched in 911. “What’s your emergency?” the calm voice on the other end of the line asked. I told the operator what was happening and did my best to describe our location. After assuring me that help would be on the way, she asked for more particulars about my friend’s condition, as well as underlying problems that the medics might need to be aware of. She told me to stay on the line.

“Is there anyone who can meet the EMTs in the parking lot and direct them to your location?” By now, a second voice was on the line, a voice belonging to someone who worked directly with the EMTs. I responded that there might be and was cheered by the arrival of another hiker we’d just met on the trail. She gladly agreed to go.

The two dispatchers continued to talk with me as I waited, asking how my friend was doing and telling me not to give them any water. That advice surprised me until I thought about it: a person who isn’t fully conscious can’t safely drink water, and my friend was still a little groggy.

“We have your location,” the two voices on the phone took turns telling me. “Help is on the way.” Time became amorphous.

I heard them before I saw them—the rustle of bushes up the trail, boots pounding dirt, and a man yelling something about a “big wheel.” The latter, I soon learned, is a single-wheeled stretcher designed to roll over very rough terrain. The trail we were on wasn’t particularly rocky, but it was uneven and steep, rated as “moderate” by AllTrails.

What happened next was pretty much what you’d expect. The EMTs buzzed around my friend, talking among themselves, and occasionally speaking to me. Equipment came out, vitals were recorded, a plan was conceived. They were taking my buddy to Seton.

Had the situation been more dire, they would’ve headed to the nearest ER, but for insurance purposes—a very modern consideration, to be sure—they went to Ascension Seton. The stranger we had met on the trail asked if I’d like her to come along too, and I told her that would be nice.

The stranger didn’t know either my friend or me—precisely the meaning of “stranger”—but in the hour or so we waited in the aptly named Waiting Room of the ER, I learned a great deal about her. She was born in Ireland—hence, the lovely red hair—was raised up North, and had come to Texas to work. This happened to be her day off, and here she had spent a good several hours of that day with us. She offered to bring me food, and when I was finally allowed to go back and see my friend, she told me to call if I needed anything. Anything at all.

But I’m digressing here, aren’t I. This was to be an article about hiking in the heat, and instead I’m talking about my new friend, whose name was Hannah, by the way. 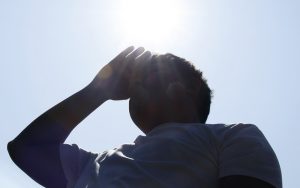 I’ll end the suspense right now and tell you that my hiking buddy was fine. A couple of hours in the AC with an IV to lubricate the cells, and we were able to walk out of the ER on our own, upright, perky as when the day began.

The moral of the story? “When I go out on my 30-mile hikes with my dog,” the ER nurse had told us, “I always take Liquid IV.” I should add that these insanely long hikes do not take place in our heat, but, rather, in the green hills of New England. That said, her point was a good one just the same: Water isn’t enough. My buddy’s diagnosis of dehydration and heat exhaustion weren’t from failing to drink water, but from failing to replace electrolytes lost to sweating.

A quick review: Electrolytes are minerals—things like magnesium, calcium, potassium—that carry electrical charges when dissolved in water. As quenchwater.com explains, electrolytes serve a number of important functions in the body. They

That’s quite a lot.

What, then, is the takeaway from this experience? A few important points for hikers in the heat:

Written by Susan Hanson, editor of the Loop, SMGA board member, and member of the Outreach Committee